Associate Records in a Workflow

Allow a workflow whereby if a deal is associated with a company (and than cmpany has associated contacts), then the contacts are pulled and automatically assigned to the deal.

This would also work the other way where if a deal had an associated contact, the company assocated to that contact would also be assigned to the deal.

This prevent double data entry and would ensure that all deals hve he appropriote associations.

My use case for this is to associate contacts fitting certain criteria to a custom object - currently, this requires some painful exporting/importing but it could be very easy to do via workflows if only there was the functionality!

You should be able to associate all of the contacts from the company to the deal, but this is of course not ideal. This setting is in the create record options of the workflow.

Here is what I do:

We run a company workflow that creates a ticket, the company has several contacts and I only want 1 contact on the ticket - this way we can auto send an email once the ticket is created to the right contact.

By doing this, when the ticket is created it will associate that URL contact to the ticket.

Bit of a workaround, but we get the salesperson to add the URL and we can ensure we have the best contact for us to email with no delays.

Yes there should be an automatic connection made between when a deal is created with a company to connect to all the contacts. you could remove the association afterwards but this being the default seems like a natural need. This came up for us in survey automation at the contact level for emails then associating the user by the deal to one of our locations.

@BrettloweAUS - do you have a WF step to use that URL to make the provided URL the only associated contact to your ticket?

@callie Yes, so long as you're only entering one URL on the company, this will be the contact that will be on the ticket.

Hope that makes sense, let me know if i can help out

We would like this functionality, but for Tickets, not Deals.

I have the exact same use case, and would love to see this feature enhancement

You can build this in Zapier.

My use case was associating all contacts to a deal of the company that is associated with the deal. Steps below:

Would be great to have this natively in workflows, but Zapier does the trick for now. 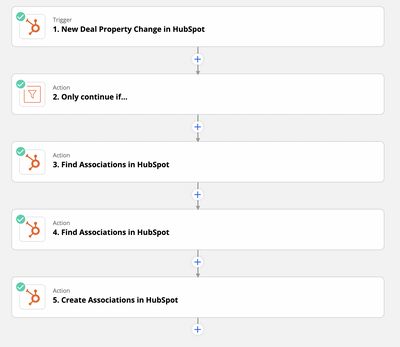 On behalf of a customer, this would be a very large help!

Use case: Deals are associated with companies, and customer would like to associate the company associated contacts to the Deals.

Real need for us here too ! thanks 🙏

I would need that functionality but for Playbooks!

This feature would be highly appreciated. In our use case we would like to exclusively document the E-Mail communication on deals level and not on the contact or company level (by manually selecting this preference via the plugin in Outlook). In order to configure this selection, we first need to have an association between the contacts and the deals of the corresponding company.

I would also find this feature helpful to connect a custom object with the correct contacts and companies automatically. In my case, the creator email for my custom object (organizations) is pulled in via API so identifying the user in hubspot based off this property and associating that contact and any associated companies would be beneficial. Right now I have to do some formula work in an excel doc then upload it and map across 3 objects to get the associations into HubSpot correctly. It is an incredibly manual process that takes some time and would be easier if this could be accomplished through workflows.

This is very needed! Should at least have the automation option available.

Need this functionality not just for HubSpot default objects but custom objects as well. We collect NPS feedback using the Ticket object that needs to be associated to individual custom object records ("Projects") automatically, but it's not possible with either Zapier (doesn't support HubSpot custom objects) or HubSpot workflows.

We would really like to see this functionality built in as well! We're using the HubSpot<>Shopify integration. It works seamlessly to bring Deals into HubSpot and associate them with Contacts. But since we do a lot of B2B business, often the Deals being brought over also need to be associated with a Company.

I have a Zapier workaround that I am using to accomplish this right now, but I'd love to be able to do it natively in HubSpot either as a standalone feature or as additional functionality built into the Workflows tool. Workflows has the ability to create records or edit properties, but it doesn't have the option to create associations between records. If it did, our problem would be solved.

Definately agree with this.

I've been sent this thread via the chat. We would like to be able to link an existing 'deal' when creating a ticket. Currently we create a ticket and then have to manually add the deal.

I ah ve also been sent this thread via a chat. It would be a game changer!