Prior to using HubSpot we used to use ACT! where we were able to schedule a series of activities to nurture a cold lead.  Typically this would consist of a series of activiest starting at Day 0 - the achor date.  The activity series would typically have 9 steps which needed to be done at pre-set intervals from the first activity - would include sending a brochure, follow-up calls, follow-up emails, sending another physical piece of collateral.  I can't see anything in HubSpot which would achieve this - instead we seem to schedule each of the activities one by one for each indivicual contact record.  Am I just missing it?  I would have thought that HubSpot was way more advanced than ACT! - but potentially not in this instance?

Hi @RichardM50 , are you not able to see this option: 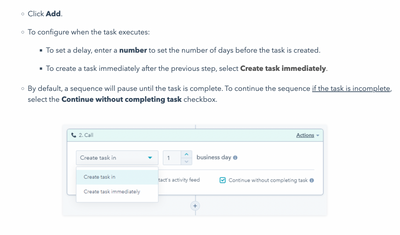 Hi @RichardM50 yes, there is no delay on the first task, it starts on enrollment, all subsequent tasks can be delayed. I'm glad you were able to get it working! 🙂

Thank you for reaching out.

I think Sequences and Workflows could help here.

I want to tag some of our experts here - @Jnix284 @SNigam @BukunmiOdetayo do you have any suggestions for @RichardM50 on this?

Hi @RichardM50 definitely agree with @TiphaineCuisset that Sequences are what you're looking for.

You can schedule a series of emails, calls or To Dos that run based on how you have it defined and once set up, can be used easily by sales to enroll cold leads.

Hi @RichardM50 , are you not able to see this option:

When trying to create or edit a task in Sequences I am only seeing the below.. 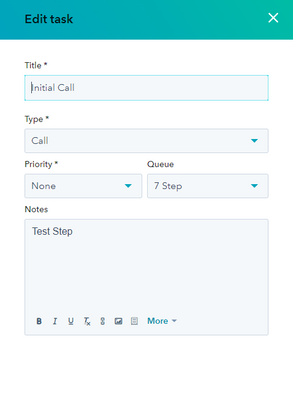 Further to my last update, I have found that when creating the second items the option is there to add x number of days between the steps!

Hi @RichardM50 yes, there is no delay on the first task, it starts on enrollment, all subsequent tasks can be delayed. I'm glad you were able to get it working! 🙂