Hey team it's your pal here with a quick post on some terminology differences between HubSpot and Salesforce to get you going.
Who am I and why do I care about this?

I have spent around 6 years at HubSpot at the time of writing, working directly with customers in various scenarios.

What is this solving for?
A common situation I would find myself in is the following:

The client has just been hired to their company

They have experience with Salesforce CRM

They now need to do their work within HubSpot's CRM

They don't have time currently to go through the entire HubSpot training catalogue to learn the full ins and outs of what a CRM is and how to use ours, they simply want to start doing what they used to do, but now in HubSpot

However, they go to get a "report" like they would in SFDC, and find HubSpot's reporting tool. While this can get them the data they're looking for, a seasoned HubSpotter knows that the 'report' they're looking for is likely more akin to our "List" and "View" tools

While SFDC and HubSpot are similar platforms, that also integrate, we are still different products and our builds/naming conventions vary. This article will give you a jump start to trying and replicate what you used to do in SFDC, by learning the terms we use in HubSpot.

My team will likely help expand on this article because they're awesome. 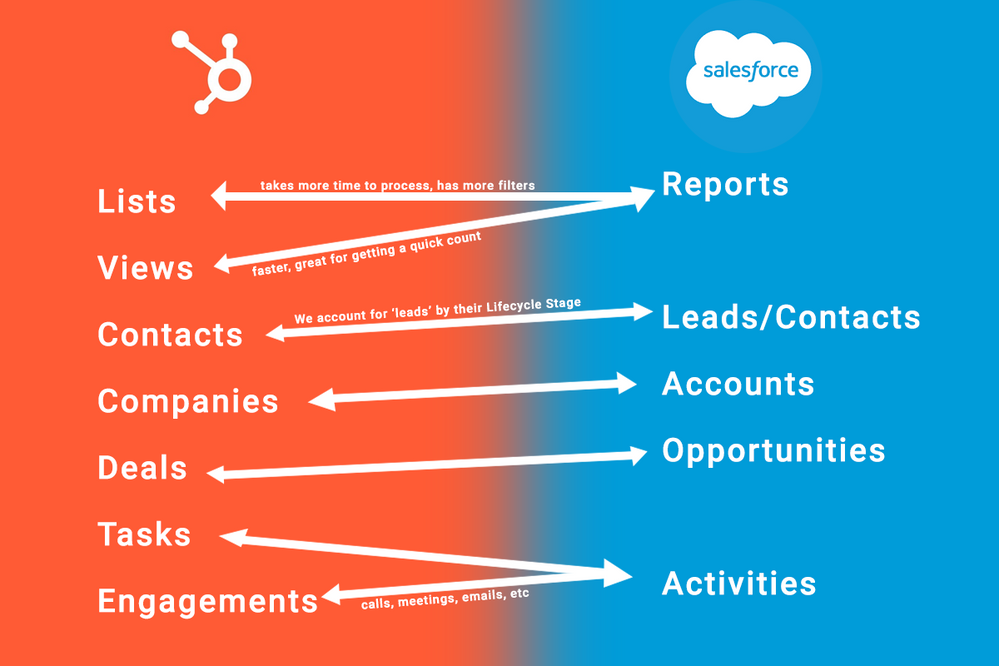 Here's the quick version to get you going!

So this all started from the common question
"How do I run a report in HubSpot"
usually from someone well versed in SFDC stuff but not necessarily familiar with HubSpot yet.

If you want to run a 'report' 9 times out of 10 you're looking for the Views tool
This is found by going to Contacts > Contacts or Contacts > Companies, and looks like this at the top:

With a table of data below.
You want to hit the All filters button, and have a crack it, have fun, you won't break anything unless you really try.

The reason the views are better than the lists for these quick counts is exactly that: they're quick. The lists tool has more filters and functions available to it, and can be used by other tools, so overall it's a 'heavier' tool to use. It certainly has its purposes, but accounts can become 'messy' with too many lists that could have been views.

If you find that the Views tool's filters are not enough for your report, now is the time to check out the Lists tool

The benefit of the lists tool over the views tool, at the time of writing (these things change!) is that they are able to regard more complicated logical concepts like "Give me contacts where their deals are all in [this stage] and their companies are all in [these states] and their account owner is Jane. "
In this above example, we're touching at least 3 objects, the contacts, the deals and the companies, with their own filters.

Best yet, Lists have or logic, allowing you to make 'groups' of filters to fill out the data table.

Because of the 'heaviness' of this tool, it's most often used to keep  continuous track of a group of objects and be able to 'do something' against that list at any point (like scheduling an email, enrolling in a workflow, being the main filter for a report, etc).

With the main chunk out of the way, hopefully the question "How do I run a Salesforce report in HubSpot" has been answered

The final bits are just a bit more symantic:

In SFDC you have Leads that convert to Contacts

Within HubSpot, a Contact is a representation of a single person.

Their Lifecycle Stage (a property on the contact object) determines if they are a Lead, Marketing Qualified Lead, Sales Qualified Lead, Customer, etc. However, throughout this process it's the same 'object,' a Contact.

Within SFDC, you have Accounts that represent a business

These can be linked to multiple contacts/leads/opportunities. They have their own properties regarding the business at large.

Within HubSpot, we call them Companies

And it's basically the same thing

Within SFDC, you have Opportunities

Within HubSpot, we call them Deals

They are essentially the same thing. Note that the first time a Deal is associated to a Contact in HubSpot, that Contact's lifecycle stage will automatically be updated to Opportunity (as will any associated company)

Within SFDC, you have Activities

These account for a plethora of things and can be defined in many ways, they are 'interactions' of some sort on that record

Within HubSpot, we have Tasks and Engagements

A Task is a sort of pseudo-object that is associated to a User/Owner and an object. Classic example would be to create a task on a Contact record saying "Call this person" and assigning it to a sales rep. The sales rep gets that task, calls the person, marks it as completed, and that fits into reporting

Engagements is another similar kind of relationship, meant to denote some sort of interaction with that object. An email to a customer? That's an engagement. A call? Also an engagement. A meeting you logged last minute? Still an engagement. These can be reported on as well.

if you made it to the end here and you feel like things are starting to make sense I am very glad, you should know enough to be dangerous, have fun good luck!

I'm used to SFDC, learning HubSpot, what do I do to start my work? Tips from a HubSpotter
Sales
May 26, 2022