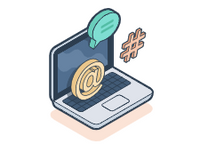 Hi community. Recently I scheduled social posts on our company Facebook, Twitter, and LinkedIn profiles in HubSpot that included a gif. When previewing in the HubSpot tool, the gif appeared to be working as expected. It was not until after we published to our profiles that we noticed the gif was frozen on both Facebook and LinkedIn.

I think it would be useful when uploading a gif to Facebook and LinkedIn posts if the tool flagged a warning letting us know of the limitations when posting with gifs. It was quite a big mistake we were lucky to catch and fix by reposting directly to the platforms instead of through HubSpot.

Just to refer you to this article posted February this year: https://knowledge.hubspot.com/social-media-user-guide-v2/how-to-promote-your-content-with-the-social...

Just to refer you to this article posted February this year: https://knowledge.hubspot.com/social-media-user-guide-v2/how-to-promote-your-content-with-the-social...

Thank you for the head's up - we are creating gifs and will have to post natively!

Wanted to follow up to this thread as we posted a .gif today to Twitter and it did not display motion.

I hope this helps

We attempted to upload an animated GIF to Twitter and LinkedIn but it did not work.  The GIF was rejected and we could not even insert it in the social post.

Welcome to the Community!

Could you please share with us more details on this specific case? What is the size of the GIF and it was saved as GIF? Did you receive an error message while attempting to publish? Did you try outside of HubSpot to publish?

The error message was: "Unable to process the uploaded image."

Is the error on the screenshot related to attention publishing on Facebook?

The error occured on all 4 platforms, I tried them all and got the identical error message.

Thank you for your information, our team changed a few things in our end, could you please re-upload your gifs in HubSpot and the new ones should work correctly when attaching to a social post.

Keep us posted if possible!

I just tried uploading to FB, LI ad TW and had the same error message as before:

I constnatly get these errors, as well. It makes building out my social calendar extremely cumbersome and frustrating.

Hello @Marika  checking this in our end, and will get back to you once I have an update.

Could you please provide us more detail such as what social media you are trying to post and the size of your gif?

The more information, screenshots, and details you can provide, the better I can advise on the next steps.

Just wanted to confirm if you removed the gif from the file manager and re-uploaded it completely and tried to publish? If so, and you are still seeing an error, could you please send us a HAR file from when you attempt to add it to your social post and send me in a private message? (step by step here)

I just re-uploaded the GIF and was successfully able to insert it into my posts for Facebook and LinkedIn.

Thanks very much for all of your help!

Hi @Marika  thank you for letting me know! I'm glad it worked.

Having the same issue - no matter how many times I try to load a gif, it gives me an error message:

I have re-uploaded the gif several times - nothing is working. This issue is incredibly frustrating as a large portion of our content calendar uses gifs.

Could you please provide us more detail such as what social media you are trying to post and the size of your gif?

The more information, screenshots, and details you can provide, the better I can advise on the next steps.

my GIF is saved as a gif and below 10MB.  trying to upload to linkedIn.  but the preview  is showing as blank.   generally what the preview shows is what happens on the site

Thank you for reaching out

Could you try to:

- reupload the gif directly from when you create your social post

if this is still not working, I would recommend connecting with HubSpot Technical Support, as Support is included in your subscription and they will be able to provide real-time assistance for this matter, where you are able to share screenshots and further information about this.

What about uploading GIFs to Instagram? That would be super helpful! If anyone has info on this, let me know.
I've tried several times - it doesn't seem to be a capability from Hubspot as of now

I would highly recommend you to please post this idea at our ideas forum (here).