Is there a way to change the default time that a task is due once it has been created? I've looked on these boards and it doesn't appear that there is, but that seems so short sighted.

a task that's highlighted in red for bing late should elicit an emotional response from the user, it should tell them that something is wrong in their task list. When the due date is set to 8am when they log in to make their calls their task list is filled with red, which they're then conditioned to ignore because it's "normal". Different users have different methods for using hubspot, and it seems like being able to personalize the account in this simple way would be an obvious feature.

Yes, you should be able to edit the task due time and date in the task details window (screenshot below.) 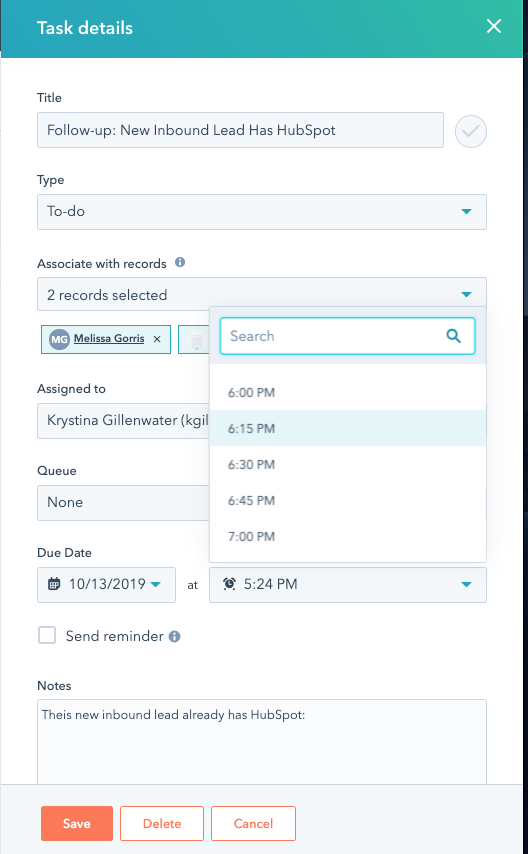 Sorry, Krystina - I mean changing the default time. So when I create every task they automatically default to being due at 3pm. Changing the time on every single task individually is cumbersome and inefficient. Thanks for the reply!

I haven't used workflows so I'll check that out, thank you for the tip!

@jaileer  @Krystina  Workflow require a certain subscription. Is there any other way? It is cumbersome to change the date before contacting.

Being able to have a setting to adjust a default would be great.

Just today I was approached by a colleague who works in the Inside Sales team that uses HubSpot Sales Hub to plan and document the calls. Many tasks have to be created manually, each with the same time span for the due date of the task. Adjusting the due date manually is not a big effort in individual cases. In total, however, it takes a lot of time. Therefore, it would be great if it were possible to set a default in the settings of each HubSpot instance.

Also be great if you could set the default to not remind you of a task.

The reminder is not needed when you already default to viewing your tasks every day.

We need the same feature developed in Hubspot.

This feature would also save a lot of time for us.

I was able to find this post in the HubSpot Community Ideas forum. Upvoting here will alert our Product Team to the popularity of this request. Doing so will also auto-notify you if/when this functionality becomes available within HubSpot. You may read more about how that review process works here.

New to the Community?
Get Started here
Change default task due date and time
Sales
Sep 1, 2020