We've been using HubSpot for about 7 months, and have pretty much moved all our business over to it. I'm a bit stuck with how best to pull a list of contacts who meet the following criteria:

1. First site visit date is between x and y dates

2. First interaction = download one of our eBooks/sample chapters (we have a mix of lead flows and forms for this)

3. Lifecycle stage =- Opportunity OR a certain Contact Property is known.

So far, I have made a list of contacts that satisfy criterion 1, above, but am struggling for an efficient way to do 2 and 3.

Any ideas would be greatly appreciated.

In regards to the two filters you're wondering about...

If your set up is different than what I am describing above, can you provide some additional information about the conversion process you have set up? 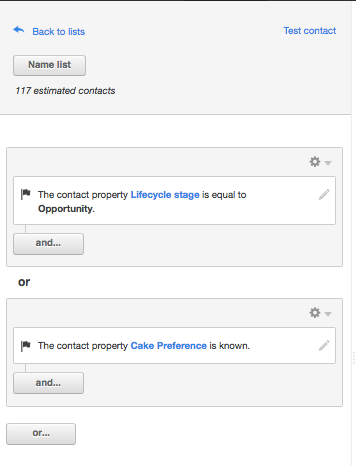 @DBellamy & @Josh do you have any suggestions for @michael_pryke in regards to gathering this data in HubSpot?

There are a couple of options here, but I thin you're original thought process is on track if you're able to use the filters that  @jennysowyrda referenced.

Also, you might want to consider using some lead scoring as well, depending on how large the list is using only the filters that you described. If you use lead scoring you can then look at that same list and sort contacts based on their overall score, which can also include time related things, known fields, etc.

Happy to chat with you about this if via a call if you'd like!
https://app.hubspot.com/meetings/joshc15

I'm trying to do this same thing.  I wanted to use First Conversion as the metric so I know that I'm only attributing a specific campaign/form/landing page to the list of contacts.  Does anyone know the actual data field that is being pulled into First Conversion?  When I add this to the list builder - it wants me to know the specific name.  It's not the name of my form and it's not the name of the landing page.

This article includes the data points available for first conversion, including the page/form and the date.

Are you looking for something else?

@michael_pryke, @Josh nailed it. Lead scoring is a tool that isn't lauded enough.  The first time I dropped an eBook, lead scoring was how I tracked how users were interacting with it, and my site.  I used that as the foundation to build the lead scoring into a more robust tool for the last company I worked with.

If you are planning on creating a list of people who's first conversion was on one of your forms, you can use the "First Conversion" contact property in a list.  If you are using campaigns, you can use the  "First Touch Converting Campaign."  To isolate users who visited your site at a certain time, you can use the "Time of First Visit" property.  Note this only shows people who first hit your site during specific times, and not necessarily people who converted at a specific time because of your campaign.  People might have visited your site before, but your new ebook campaign would be the thing that pushed them to convert.

It is possible to create lists that identify how many people started and finished a conversion path in a specific manner, but that can turn into a bit of a rabbit hole.  My favorite tool for finding holes in my conversion paths are Google's Goal Flow and Funnel Report.

I hope this was helpful and Happy HubSpotting.