What is it?
Users of non-Hubspot forms can now quickly and easily convert these forms into a native HubSpot form.

Why does it matter?
The ability to use non-HubSpot forms to fill your CRM with leads lets you get started on HubSpot without having to change all the conversion points on your website. If you already have conversion points built out across your site, it’s a huge time saver. As you continue using HubSpot’s tools, you eventually might want to start using our native forms tool. This update lets you quickly and easily convert a non-HubSpot form into a native HubSpot form so you don’t have to manually go through the process of doing so.

How does it work?
From the forms dashboard, click actions next to any non-Hubspot form. You’ll now see the option to convert these forms into HubSpot forms.

Clicking this, you will be shown the following message. 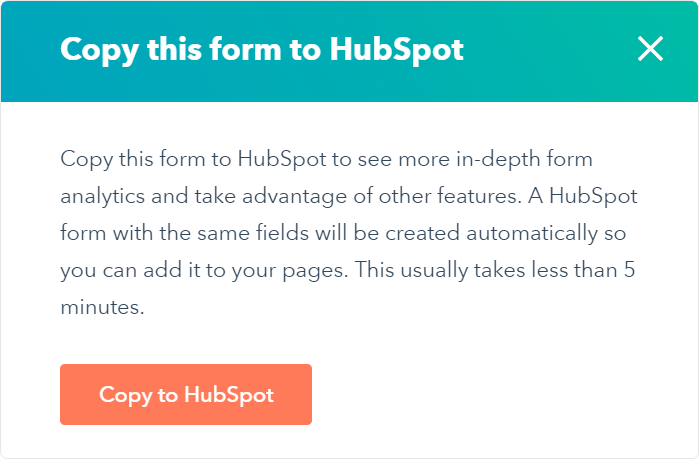 Once finished, you will be brought to a copy of your form, which will be denoted by the word “converted” in the title of the form. The original non-HubSpot form will remain in your portal after making a copy.

Who gets it?
This is now available to all users of non-HubSpot forms.

What language is it in?
All languages supported by HubSpot.