What is it?
Today at INBOUND we announced the beta for Facebook Ads Audience Sync. This is a new feature of the Ads Add-On that lets you sync any HubSpot list with targeting audiences in Facebook. Doing this lets you retarget people in Facebook based on actions tracked in HubSpot and use dynamic targeted based on HubSpot lists.

This feature is now live inside of HubSpot for all user with the Ads Add-On.

Why it matters
Facebook and Instagram ads work great, but only if you target the most valuable audiences. When you leverage the data you have in HubSpot for targeting, it drastically improves the effectiveness of your ads. With this new feature HubSpot's lists inform your Facebook audiences, making it easy to keep your ads highly targeted and fresh. It also means you can stop constant manual downloading of data from HubSpot and uploading it to Facebook.

How to use it
Syncing a HubSpot list with Facebook allows a few different types of marketing tactics.

1. ABM (Account Based Marketing)
If you’ve been doing a good job of creating leads and subscribers from many different but aren’t closing big deals, it might be a good time to try ABM. Build a list based on specific company criteria, create specific content for those companies, have your sales team call on those companies, and target them with Facebook ads. You’ll easily be able to keep this list synced up with your Facebook ads so you’ll always have them as another option to help close deals. 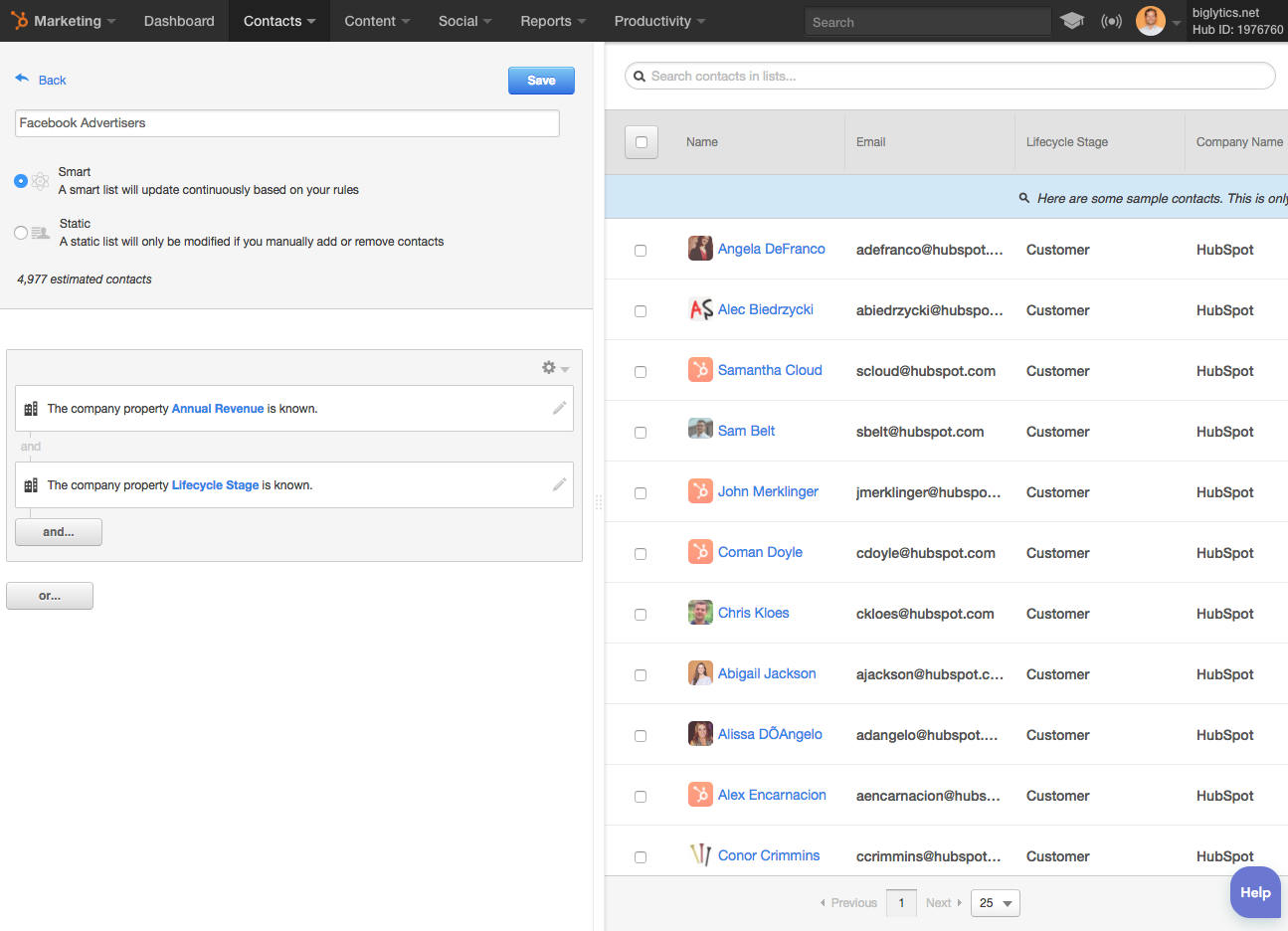 2. Bring prospects down the funnel
It’s much easier to get someone to sign-up for a newsletter than it is for them to sign-up up for a sales meeting or demo. With Audience Sync you can use Facebook ads to target those people who have signed up for your newsletter with ads suggesting the set-up a meeting.

3. Adding a targeted touch point
You can use this new feature to trigger ads based on actions. For instance if you are running a campaign that attracts people to a blog post, and it includes a link to your pricing page. You build a list to capture that behavior and then retarget those people with ads. Another example is targeting people who opened your launch email with a "get a demo" ad on Facebook.

This is just three of many use cases for adding Facebook ads to your existing inbound efforts via this new integration.

How it works
Via an API we’ve connected your HubSpot lists directly into a Facebook Audience. So when you make changes in HubSpot the reflect in Facebook. Setup the sync in the Ads Add-On.

Who gets it
HubSpot Marketing Hub customers who also have the Ads Add-On.

When is it live
This product is in a limited beta now and will be rolling out over the course of the year. Reach out to your CSM to request access to the beta.

Pricing?
This product is part of the $100/month Ads Add-On

What languages is this available in?
All supported languages