The android app seems to have some major issues when entering deals.

I encountered these issues on a sales rep's phone while trying to train them on how to use the app (Samsung Galaxy S7, app version 2.0.865 installed) and went through all the normal IT troubleshooting steps (restart app, restart phone, re-install app) to no avail.

I then tested my phone (Huawei Mate 10 Pro, app version 2.0.865 installed) to see if I had the same issues which I did.  I applied all the troubleshooting steps as above with no resolution.

Firstly, deals imported and configured on the desktop web portal are not visible.  The total number and value of deals is shown by stage but the individual deals do not display, only a 'loading' sign: 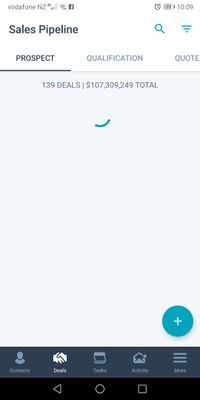 A deal that I set up on the sales rep's phone while trying to demo the app to her is visible but as above, no details, only a 'loading' image: 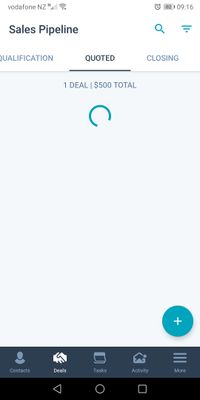 I then created a deal on my phone to try to dig further into what is going wrong.

Once I had entered all the basic data and went back to the main deal screen the deal I had just entered was visible: 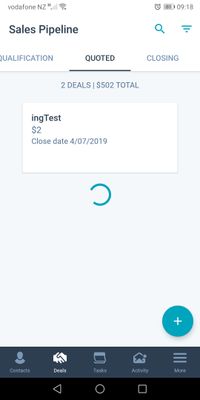 I then went back in and added contacts and a company to the deal.  Whilst doing so I noticed that contacts added do not show up while companies do: 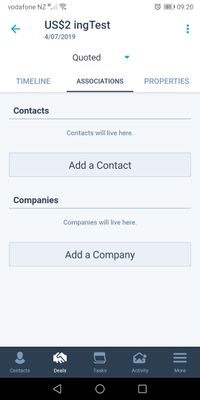 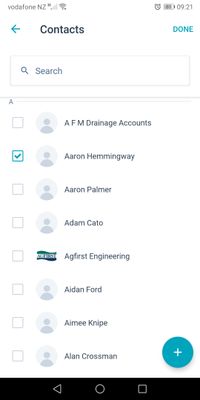 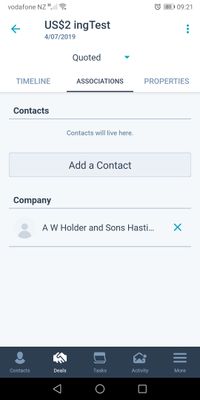 At this point the 'Properties' screen is visible i.e. I can scroll to view the properties of the deal.  When I go out of the deal to the main deal screen then back in to the deal, the contacts that I added are now visible but the properties screen is not, just a 'loading' image: 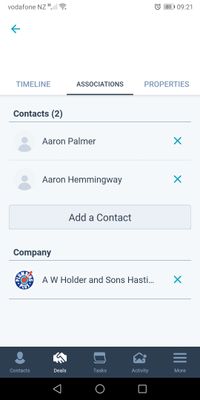 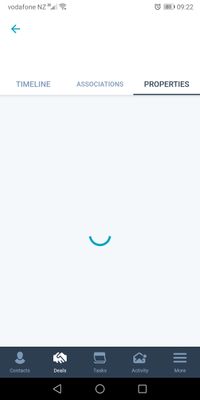 At this point the only deal visible on the deal board is the one I added.  I then closed the app by going to my home screen and closing all apps.  Going back into the app I see that the deal which was previously visible is now not, like all the others: 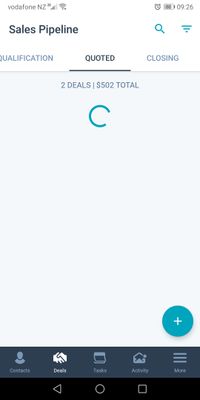 So it seems like the deal information is only visible when stored locally on the phone.

Looking at the web portal on my desktop, all the deals are there:

I have checked this on WiFi and data to make sure that this wasn't something to do with our WiFi network settings and the results are the same as above.  Additionally I checked the same process with the sales rep's phone (to make sure it wasn't unique to mine) with the same results.

Please help, this product is really great in so many ways but without the ability for our sales reps to add deals while on the road we have a big problem!

The latest version of the app seems to have fixed all the described issues.  Good job by the mobile development team!

Thank you for sharing this detailed feedback. I passed this along to the Mobile team and I will keep you posted on their response.

I am going to private message to you with an update.

The latest version of the app seems to have fixed all the described issues.  Good job by the mobile development team!