Hi, we have two leadflows on our website, a right slide in box on the homepage which is working and and pop-up one on a specific page that is not working and I can't seem to figure out why.

The pop-up leadflow was working up until 9/17 it seems, as there have been no form submissions since then, when before we were getting at least 1 a day.  If I look at how many "form views" the leadflow has gotten, it says that it is still generating views but mutliple attempts to get the leadflow to display have not worked. I have cleared cache & cookies multiple times, tried incognito browsing and have had friends try who have never visted our site or seen the leadflows to no avail.  Have tried checking in Google Chrome, Microsoft Edge, IE11, Mozilla Firefox and iOS Safari. I have confirmed that the tracking number is installed.

This is the page that the leadflow should display on.  There haven't been any changes on our end to the page as far as I know so I'm thinking this is an issue with HubSpot. This is a high traffic page and every day that this leadflow is down we are losing potential leads.

I have tried switching the format from a pop-up box to a slide-in box (left & right) and to a top banner, non of which have worked. Also have tried creating a new pop-up leadflow entirely and publishing it on the same page and that did not work. Also tried creating a new leadflow (tried all styles) and publishing it to a different page and none worked.

I've visited your site to see if I can see any Lead Flow on the page you've mentioned, and I can't see one.

I do however see one on your homepage for a Free Trial. It has some weird behaviour though. When you scroll down it goes in behind your main body and then re-appears at the bottom of the page (images below). It must have something to do with the design.

I noticed on the page you've linked that the footer has it's own scrollbar as well, so could it be that the Lead Flow is showing but it's behind all the content? Seems like elements of the page are independent of each other so it could be attached to one element and not the others? Could explain why it's getting views, but no submissions.

Scrolling from the top... 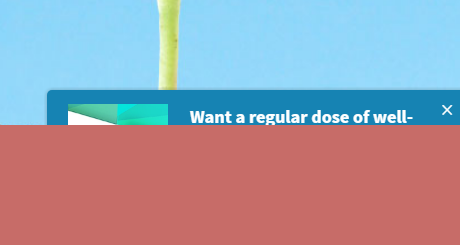 Then at the bottom...