This week we want to spotlight Connor Slivensky, you may know him as @Huble_Connor  in the Community. 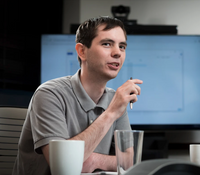 Connor shared some insight about what he does for work and how he started with HubSpot. Discover whom he would love to have dinner with and why.

Tell us about yourself

I'm a process-oriented thinker who likes to leave the creativity to others and try to dig into "The Question Behind the Question" to effectively address concerns and implement the optimal strategy. I'm currently living in the suburbs of Chicago where I grew up.

How did you start using HubSpot? Was it in your current role, or a different role?

I was hired at a corporate room rental company two weeks after integrating with HubSpot and was told I was now the HubSpot expert. I spent the next 3 years working closely both with paid support (200+ tickets) and the community to expand my expertise.

Unfortunately due to COVID-19, the company had to close and I'm looking to put my skills to use elsewhere.

What do you do for fun outside of work?

I'm also trying to learn other software such as Salesforce to stay productive.

I've also been using my Xbox to stay in touch with friends and play basketball together as we're in isolation.

If you could have dinner with anyone in the world. (past or present), who would it be and why?

I'd have to say Augustus or Diocletian, going back to my interest in Political Theory. Both were responsible for huge political changes and reforms that outlasted the empire itself.

Thank you for sharing a little bit about yourself with us, Connor! I love Romans and their history and culture! 🙂  Have you visited the Coliseum?

Do you want to keep in touch with Connor? Connect with him on LinkedIn.

Stay tuned for our next Humans of HubSpot post for next week!

Thanks for the shoutout Sharon. I went to Rome when I was younger but that was before I really knew the history and significance behind everything and I was a pretty picky eater (pizza every meal). I do remember some things but I'd like to go back now.