@Kevin_inksoft   There is always IP Timezone. We are using that token in our task titles and it works relatively well for our sales people.

Our IP Time zones are helpful for the "time" but I can't filter my tasks that way - and they are mostly inaccurate for the city.

Chicago for most of the midwest, LA for most of California. It's not that helpful. It's better than no option, but it's not great.

@Kevin_inksoft Didn't know that the free version allowed for sort. That is strange that it's not mirrored in the paid version.

We've tried all sorts of work-arounds, including putting City in the task title. Our salespeople just search tasks for the timezone or state to plan out their day but you're right, it's not ideal.

@mbfolger - I am saying competitive freeware can do it. Not Hubspot.

Staff is taking time to convert the timezones for the Create a Task losing productivity and making mistakes on the conversion. This would help.

It's been 15 months since the original request. Add a filter please for time zone. Simple enough.

Our sales team is opting-in to test drive the CRM and have a recommendation.

If hubspot could have 2 columns, one with a phone number and another with a timezone in the list view when it is a task call activity.

I'm sure you can parse the area code to get this accomplished. Calling at a certain time of the day makes a big difference, which Hubspot actually has articles on. We are using a third party tool to import tasks. In addition, in future uploads, I can write messaging to the title, but if using a workflow to assign task, columns would be needed. 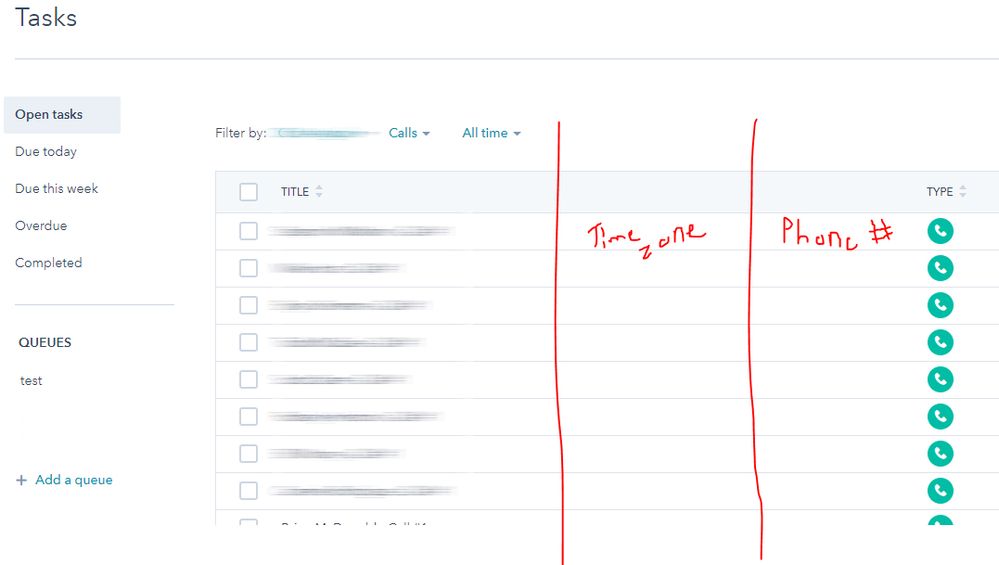 Seems simple enough. I work out of the Midwest and would like to separate my task workflows by location of prospect. If I could create an Eastern, Central/Mountain, and Pacific task queue, I could be  much more streamlined in my work flows.

Also, not all tasks are created equal. I want to call people that have interacted with my marketing emails and website first, and get to people not interacting with my website after them.

This post was created so long ago! Please fix it!

Time zones..... Going on 17 months since the first request! Pipedrive can do it. Just saying. $15 / month per user can do it. Let's get it updated please.

As a European company that does business in North America, and generally around the world, this feature is a must. Having to open every single task to check the contact's time zone is a real pain. I understand it's not as simple as adding a column but having the ability to see the timezone and sort by it would be amazing!

Not sure if this is allowed to post but I am using the Chronomouse Chrome extension to quickly indentify timezones by simply marking the area or country code. It doesn't solve the Hubspot problem but prevents tedious googling.

Can we please have this?! I upvoted almost a year ago and this was posted even longer ago.

We need this too.  We have put a workaround in place but this takes time to set up.

I agree, but feel that tasks/contacts associated with certain time zones should be made available as the day wears on. For example, I'm in the eastern time zone. Therefore, I begin my day with eastern calls at 9am. At 10am CST calls should then appear in my queue, then at 11am MST, at 12pm PST, etc... It would be an **bleep**-proof way for callers NOT to make calls at inappropriate times due to human error or lack of checking before the call connects...

FYI - I made the post below as anew post; admins identifiied it as a duplicate idea and merged it into this thread, which is why it doesnt look like a response.

Reading through this thread, it's frustrating to know that this feature has been requested for 2 years. It's an important functionality that would really enhance this tool.

I'd love if we could filter/sort our call tasks by customer time zone. I'm in the Central time zone. This way, I could be sure not to call the West coast too early, East Coast too late, and ensure I don't inadvertently call overseas in the middle of (their) night!

A step further, HubSpot could give me the option to automatically sort my call list based on time of day in the customer location, and/or provide a pop up with a notification that the cusotmer is in 'xx' time zone if I attempt to make a call outside of thier normal business hours.

This would allow me to be more efficient and begin East coast calls as early as 7:30 or 8 (central time), then as the day gets later, I can shift late afternoon calls to west coast.

My name is Scott, I am the product manager on the tasks tool here at HubSpot. There are two really great ideas in this post.

For call tracks, I recommend checking out our sequences tool, which is specifically designed for helping with email and call cadences for sales outreach.

For sorting tasks by timezone, this is something that my team is currently conducting research on. In that respect, I am flipping the status of this idea to Being Reviewed. If you're interested in chatting with my team about how you would leverage timezone for sorting tasks, it would greatly help us to hear from you as we dig into the problem and potential solutions here. To that end, feel free to schedule a time on my calendar if you'd like to connect on task timezones.

Thanks Scott! Great to hear the idea is being reviewed! I just booked some time to chat tomorrow.

Agreed this would be super helpful. I have created a "UK timezone calls" queue so I know who to call before 5pm (as I work lunchtime until late UK time), which is a pain as I have to remember to put tasks into the queue.

I need this too!  Even if you just showed the State a company is in on the Contact record - that would be helpful