Currently it's really hard to determine which customers are 'repeat customers' –  customers who have more than one closed-won deal assigned to them.

I've tried creating lists that use the below filters however, this still brings in contacts who don't meet the criteria (for example two deals and only one is closed-won). As the deal stage currently looks at 'at least one associated deal has', the list will always end up including at least two deals, however it doesn't narrow them down enough to only include contacts who have two or more closed-won deals.

What we need is a way of filtering deals so that we can see contacts who must have more than one, closed-won deal. 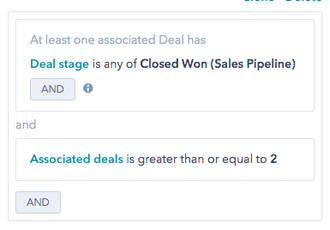 Agreed, this has caused me some headache, too!