New contacts are constantly added to our existing deals, which take an average of nine months to close. These people are often part of the DMU and important to the project, but unknown to us at the start. Sometimes the contacts originally associated with deals have only small, insignificant roles during the project.

We want to add timeline activities of new contacts associated with deals - even if the deal already exists. Meetings often take place with new contacts that have been associated with existing deals at a later stage. It is now unclear if there are any upcoming tasks related to deals and it's labor-intensive to add the right activities and keep an oversight of projects from any type of dashboard.

In the image below you see part of the screen that is shown during the creation of a new deal. I'd like the tickbox to be added as well when new contacts are associated from within the already existing deal: 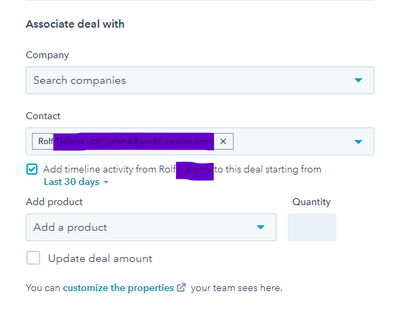 I agree with this and this is something we would need.

I don't understand how it can be an option when you add a new deal but not when you associate a contact with an existing deal. Obviously the functionality is already there to do it, its just not added to both locations.

We also require this feature and I'm surprised it's unavailable. We've just migrated a load of deals from another system and we can't sync the activity in the contact/company associated. Frustrating.

Upvoting this on behalf of a customer! Would be useful especially if the default "last 30 days" options doesn't return much activities, so users can update this after the deal is created to pull in more activities

I'm finding it takes extra clicks to check individual contacts "associated" with a deal to see upcoming tasks and past communications. I'm not sure where exactly you could put a checkbox for this option, but it seems like the functionality already exists. I like the idea @Rolf had as a start, but it would be even better to be able to add the activities of contacts who have already been added to the deal. Specificially, we had a new hire who created a bunch of deals and added associated contacts but didn't check the boxes to add their timeline activity. Thus, the contacts are already added, so I don't think Rolf's proposed solution would work for us. We'd need some sort of dropdown or menu item on the deal level that lets you check off all the associated contacts, companies, etc. whose activity you want to show up on the deal. Thanks!

I agree with the need for this. Can a workflow be created to accomplish this?

I am looking for a short term work around.

Is this just an omission? I spent ages looking for it because I new it was there at the start.

The functionality alreay exists when you create a deal. Surely this is an easy fix?

As a deal progresses, more decision makers become involved over time. It's a very cumbersome task to click through into the contact records to check what our past correspondence was prior to adding them to the deal.

+1, this would be extremely helpful and a feature our company would use on a daily basis.

This has to be something that is automated in the system, maybe a simple solution is to have a toggle popup offering the user to include and associate all history or not?

This is not an omission, this is just how HubSpot is. Get used to the frustration of discovering just how many painfully obvious functions simply don't exist in HubSpot, especially if you're used to a more mature, feature-rich platform like Salesforce.com.

HubSpot has a pretty interface, which makes it the default choice for people who are scared of the stark, complicated and difficult interface of Salesforce.com, but at least with Salesforce there's always a way to do what you want, even if it takes a while to figure it out.

With HubSpot, though it's easy to use, it lacks so many basic features that you'll be forced to adapt your workflow and your marketing strategy to HubSpot, which is not the way you should be making decisions.

Also, get used to their canned response when you complain about missing features, which is "Suggest it in the Ideas Forum".

Only about 1% of features in the Ideas Forum get developed every year, so good luck with that.

I agree with this !

+1 also important for us , because I can train staff as much as I want - still it happens all the time