OR operator for lead score property

I think it would be of great advantage if we could define lead score sets not only with the AND operator but also with the OR operator.

E.g.:  I want to check whether a contact has visited www.hubspot.com/pricing/ OR https://www.hubspot.com/case-studies and want to score this behaviour with 2 points.

Right now its only possible in the following way: 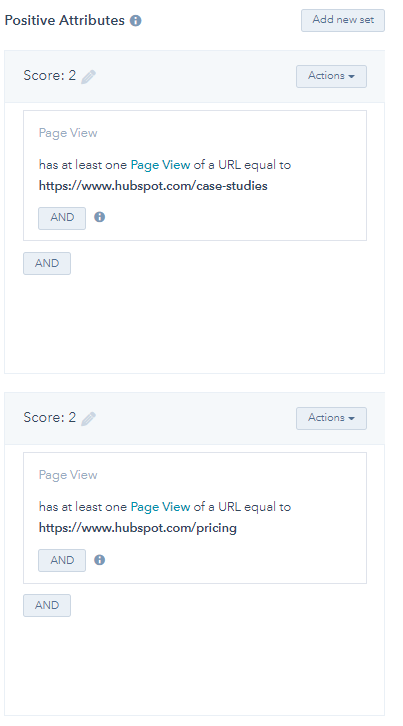 My goal is to sum up both URLs in one set.

Hope you get my point.

After taking a look at how Lead Scoring is set up through the property Hubspot Score I think it would be much more efficient to have "OR" as an option and not just "AND" to build out the scoring. This would allow to treat all assets you want assigned to a certain point value to be in that one category instead of assigning the same point value to each asset.

For example, if I wanted all email opens for a certain campaign to be 2 points per open then I could create this with an "OR" and would be able to just add each email I wanted in this point value there.

The way it is built now you would have to create this multiple times because with "AND" it limits the scoring. Because if they only opened the first email in the campaign but not the second and you have "AND" to score the emails they would not get a score for opening the original email.

I don't undestand why the option to add OR logics in scores is not a feature since day 1. It's very much needed. For example, I want a lead to obtain 15 points if they viewed at least 1 Decision page OR viewed at least 3 Consideration pages.