No Location on activity feed

I am writing to complain about your new policy (effective in early August 2019) of not showing location with the email opens.

I rely on that info to let me know if someone is out of town, or if the email has been forwarded to another person in another location.

Can you reconsider this? It's really a big disappointment!

I do not know how displaying the location of the receipient on the Hubspot portal affects the receipients experience.   They dont see this information.

To be clear, if this feature is removed, we will be looking for a replacement to Hubspot.

While we're waiting to hear back from Elise, let me suggest to my friends at HubSpot that they invite their sales function stakeholders to this conversation. It seems like every decision to remove functionality effects sales people. If you do not have anyone representing sales people on your product teams, then look into adding this perspective. If not, the writing is on the wall...

Elise is going a quarter-step further than the initial explanation adding that "it feels out of step with evolving consumer expectations around privacy." C'mon folks... that's doublespeak. Hate to say this, but whoever made the decision to put this out there with this language has completely miscalculated the response. Did they think they could just gloss over it with corporate mumbo-jumbo? Not personal but you can't talk to your customers like children and expect them to respond positively. Either fix it or just be honest about it and tell the truth. Thanks... Jeff

As one who will be looking for a replacement to Hubspot should they stick with the abrupt and questionable decision to remove a valuable feature, I join others in asking that the decision to remove the location feature be cancelled. If the decision is based on "the email recipient’s experience",  consider that the recipient is often spared additonal emails based on our knowledge that what we have sent is under consideration.  If this capabiity was propietary to Hubspot, it might be a different matter. Please reverse this decision.

I concur with many of the others who do NOT agree with removing the location feature. I am surprised Hubspot thinks this provides no value because this is precisely the feature that keeps me paying for Hubspot.  The location feature helps identify different parties/offices opening the email and allows me to get an idea on traction and timing for follow-on phone calls and emails. If every open alert I get is a ubiquitous 'email-x opened', this will not provide me the value added needed for me to continue paying for my Hubspot subscription.

One more thing to note... with the increase in false opens (ie: Gmail, etc), HAVING the location data can help us differentiate between Google opening our email and our intended recipient opening the email. I sincerely think you need to be focusing on making the tools we use through Hubspot more effective... not less! Thanks... Jeff

Thank you all for sharing your feedback.

We understand that some of our customers use location data to differentiate between recipients in one-to-many email sends. While it’s never an easy decision to remove functionality from our product, we believe this is the right thing to do to protect the privacy of the end customer.

We made the decision to remove the location feature after analyzing its current use and weighing that against its potential for abuse and privacy concerns for the recipients. We are currently exploring other ways to provide this functionality that don’t include revealing location data and will keep our community updated on progress.

That’s actually not correct. I just opened an email I sent to a prospect for reference and it logged it as an Open from that contact. However, the location is my location so I knew it was me and not the prospect.

I have to agree, this feature of blocking self opens doesn't work as expected.  I have my static IPs blocked and yet it consistently shows false opens.  The location is the only way I know who is really opening the email.

Why doesn't Hubspot leave this feature in place while you explore other options?  Why remove a crucial feature, promise us you will "look" into and then we never get a replacement feature.

Keep the feature in place until you have other working options please.

If privacy is the overriding factor, then what else is on the chopping block?

@stiebens61, you're right. While we are still able to minimize the risk of false open and click notifications for any activities that you perform, there are times where this technology simply won't work based on a few different factors. I've ammended my previous comment.

I agree with @stiebens61. This happens to me all day long, every day. Shows an open that is not named, but is actually me. 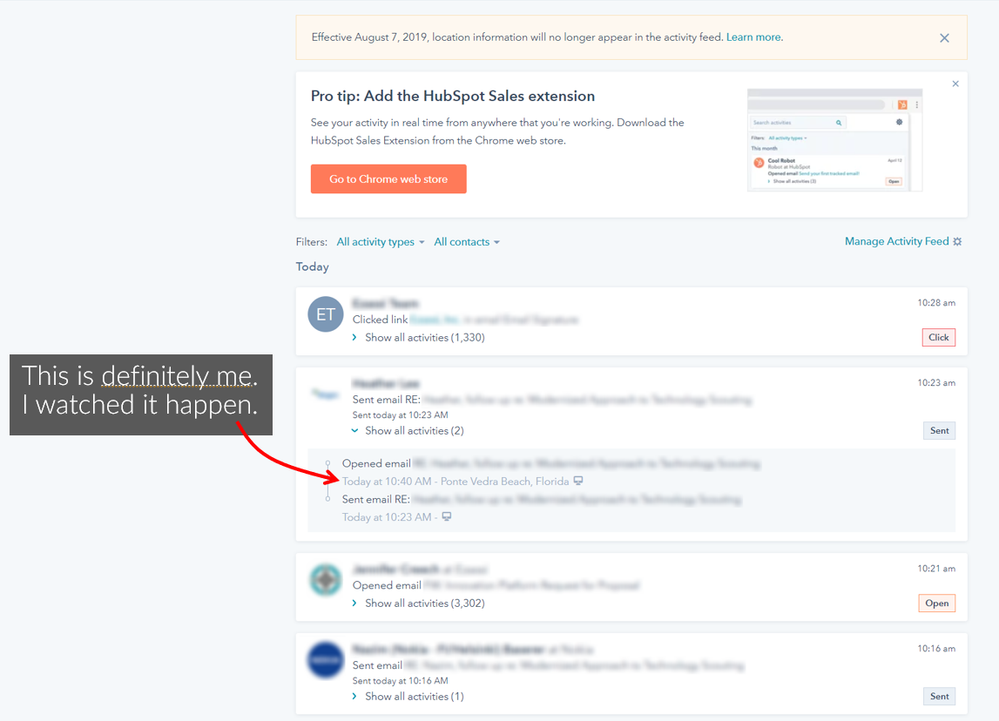 And, if privacy is the overriding factor, it would help HubSpot to state that reason on the Activity Feed instead of:

"While email tracking can prevent over-emailing and help you time your follow-up in a relevant way, the location data attached to that tracking did not add enough value to either the user or the end-customer-experience."

This appears to be immensely inaccurate in two ways: 1) The HubSpot reason being expressed in this thread is privacy not user/end-customer-experience value; and 2) It is of great value.

@ebeck ,I would be interested to know how it was decided that it wasn't of value to the user / user/end-customer-experience. Was this a response to a HubSpot users poll?

I totally agree with the other dissappointed customers on this issue. Because of the location element, I had tolerated the unnamed, inappropriate notices (my opening). Without it, the value of this feature is near-totally diminished.  Please reconsider.

Friends and co-users... I'm not optimistic here. Looks like lawyers and politics are driving this. That's a shame. Especially when WE are the paying customers! We've used HubSpot for years, but truthfully, email tracking has been the main reason we've stayed. I imagine that is the case for many others. The mistake HS has made here is that they did not anticipate an uprising and weren't prepared for it. That's why they've stumbled here. Again, no disrespect intended. We're all human... but there's a bigger trend here, folks. I'm not optimistic. If there is a glimmer of freedom left, the market will deliver a solution. But the glimmer is fading.

Now, back to work and hope for the best...  Jeff

I had responded as soon as Virginia posted, a few days ago, but for some reason my email disappeared.  I wrote immediately to Brian Halligan, the CEO of HubSpot; Sam Awezec, Senior Marketing; Jordan Pritikin, Team Manager.  I got an email from Chris O'Donnell, SVP of Product, asking to call me (I haven't heard from him).  I expressed my strong disapproval of the location feature being removed for the same reasons others have stated:  location is the primary feature for me of HubSpot, beyond the notification of my email being opened.  It lets me know that someone other than ME opened the email.  It indicates or suggests if the primary person opened it, as opposed to the executive assistant.  It lets me know if the pitch was sufficiently interesting for it to be shared with colleagues in other locations.

My HubSpot has developed a problematic glitch in the last two months:  my Sent email IMMEDIATELY shows me an Open in Mountain View, California.  It's some sort of bounceback ping thing by Google, even though it happens with multiple corporate emails.  So the first open notification is useless - but at least since it shows Mountain View, I know it's the Google ping, then I wait to find out if it was really opened, and if it indicates a location other than Mountain View, then it has officially been opened.

With location removed, and the Google ping, the service is essentially useless.  It would just be a blind open.

I'm not clear how privacy factors into this, since the location is generalized to a city.

I've put out queries seeking whether there are other services that also track emails.  HubSpot will have almost non-existent use for me once they remove location identification.

Is what Hubspot is saying their concern, really a concern? Look at how publicly traded TradeDesk (TTD) uses propietary location / IP info to help marketers target their advertising. As long as Hubspot's location info is generalized to city level and not a specific address, there should not be concerns for privacy given how information is shared and collected these days.

Again, if Hubspot ditches this feature, I am canceling.  Not a threat but a certainty.  The CRM aspect is easily replaced and actually redundant for me. The only reason I kept Hubspot is the tracking feature.

HubSpot isn't being fully transparent with their customers.

This decision as was mentioned by an earlier post, was entirely driven in response to the blowback Superhuman is/has received with the email tracking feature built into their software.

100% the case, and it would behove HubSpot to acknowledge this.

You mentioned in your post: I'm not clear how privacy factors into this, since the location is generalized to a city.

That is what is driving the conversation.

While email tracking as we know it has been around for years, it was never discussed publicly.

As the Superhuman platform has exploded onto the scene, the feature was noted as being invasive, with email tracking being at its core. It really was never criticized before, but as of a week or two, it is. We have been fortunate to have had to for as long as we have. Other suppliers will pop up to replace those requiring the info as long as there is no law against it. Others exist today (not mentioning who, sorry).

As for the 'privacy factor' you mentioned as not being sure how it applied, the point is being made that a vengeful former partner would know what city somebody is in if they wanted to confront or do them harm.

The landscape has changed, but HubSpot was clearly evasive in explaining the situation to their customers.

As a Principal with IT repsonsibilty, I will recommend cancelling our subscription as this was one of the main reasons we used Hubspot.  Sad really.

I’m the Director of Product responsible for the sales products. We very much appreciate all this feedback. Removing location was a hard decision, and ultimately we feel it is the right one. There is an ongoing discussion in the industry about the ethics of location data of email recipients. I don’t want HubSpot to be on the wrong side of that discussion, and I want to be proud of what we build. We do understand that for some users, removing the location information from the activity feed is negatively impacting your experience, and so my team and I are looking at ways to improve both self open notifications and multiple recipient tracking. Stay tuned.