Hi @Lauren_Lokker - Thanks for the feedback! Folders within folders for workflows has been added as a new thread here, please upvote there so we can assess customer support for this particular request: https://community.hubspot.com/t5/HubSpot-Ideas/Folders-Within-Folders/idi-p/289607

@Msyvrais & @KeyWestScott Thanks for your feedback as well! I'd recommend adding your vote and comments to this post that raises a similar request: https://community.hubspot.com/t5/HubSpot-Ideas/Now-that-you-have-created-folders-in-Workflows-etc/idi-p/290090

@Anonymous Sorry about that! We just found and fixed this. It should work as expected now.

@auto_mate Thanks for the feedback! We're actively looking into the sorting rules used to determine order and will have a fix out soon.

Thank you for reporting @Anonymous, the team is working on a fix! If you encounter something like this in the future, I would recommend opening a support ticket so it can be sure to get to the team's attention as soon as possible! I will update here again once this is fixed

Note: You can only create one level of folders, and cannot nest them. Deleting a folder also deletes all the workflows inside of it, which is made clear in the prompt.

Hi everyone, I'm excited to say that the day has finally come, and we have put workflow folders in beta! If you'd like to participate in the beta, please fill out this form and we will get you added: https://docs.google.com/forms/d/e/1FAIpQLScUOtdaQm15PyQa0v462yBtWp_lu4XUW7J2YKxqoRNHl_GWjA/viewform?usp=sf_link.

Re: Folders to organize Workflows - changed to: In Planning 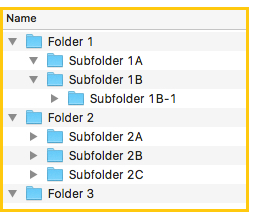