Export All Properties in CSV.

We just switched over to HubSpot from Salesforce and are trying to do an audit on which properties we have - so we can find duplicates and either merge or delete them. It would be great if we could export all existing Properties in our system with their Name, Description, Type, # Contacts w/ Value, Workflows Used In, Lists Used In, etc.

The Export Property Definitions functionality is now available for Super Admins on all hubs.

To use it, navigate to Settings > Property Settings, and find the "Export all properties" link. Find more documentation here.

I look forward to your feedback! 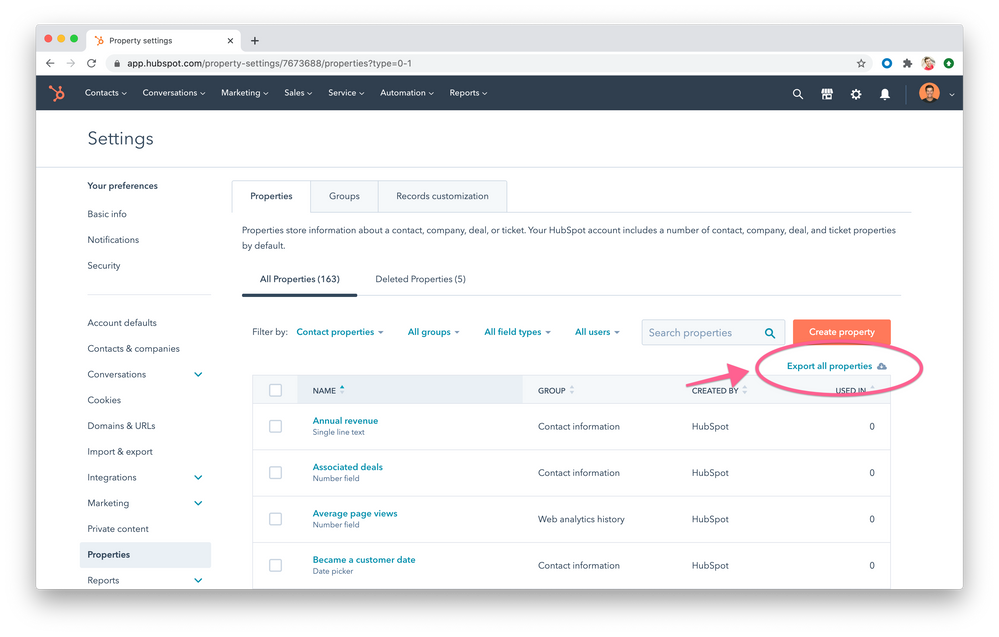 I'm excited to share we've implemented a Export Property Definitions feature, thanks to your feedback. You can now export all property definitions for your Contacts, Companies, Deals, and Tickets! Always nice to share some good news.

We don't have everything from Taylor's original request in the first release. Here are the columns included:

This is in limited beta for a short period, and then we'll be rolling it out to all hubs over the coming weeks. Excited to see how you can use this to de-clutter your hub and reclaim master of your HubSpot domain.

Thank you for your continued feedback here. I'm delighted to let you all know that this is something in active development and should be available soon. We'll update this post once it is in beta!

This is a high priority for myself as well.

It's the kind of feature that is table stakes on an enterprise platform.

We use Hubspot in an increasingly complex environment. More apps connect to it than ever before. We need a way better tools to manage the complexity as an administrator. Other enterprise-grade marketing platforms, like Pardot, come with this feature.

Is there any chance to get this implemented?? That would be very helpful for us too.

Also looking for this

Needed for team communications. Which deal properties are created and which they would like to add to thier view.

Super useful indeed for large Hubspot implementation - having both properties and all their values together would be brillant for our yearly data cleaning + when we implement additional instances of Hubspot.

A hack (e.g. if you want to export the list of deal properties) would be exporting all deals > select "Include all properties" > and then just copy the first row with all your properties! 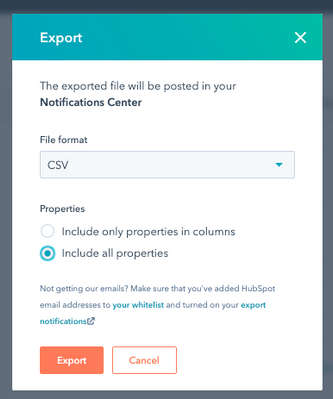 Thank you for the idea, chlooyee.  Much appreciated.  However, while that will provides all the property names, it doesn't provide a way to do any analysis.  We also need the Group each property is in, who created each one, and how many forms it's used in.  If a field isn't being used and isn't a Hubspot created field, then we may want to remove that field to clean keep the list clean.  We have found duplicate fields (but not named exactly the same) in the past and it would be great to know which one isn't being used or is used on the least amount of forms to know which would be the easiest to remove, etc.  We have almost 300 fields, and don't want to do this going one by one.

From the thread, you can see people have been asking for this for years.  This should be fairly easy for Hubspot to program.  It's basically an Excel spreadsheet with 4 columns.  I'm not sure why they won't provide this useful function.

Is there any update on this?

It is not a first time that we need this option for our clients, migrating from one system to another.

Export all properties for contact is not really helpfull as we need to include in the report property type, property group and the options if it is a drop down.

This would be so helpful! Right now it's a lot of manual when doing certain mappings to those fields from 3rd parties.

One item I would add to this would be the ability to Export Contact Properties by Property Group.  Just having the properties doesn't tell the whole story of what the property is but having the group that it is in would help in field review.

We need that ASAP. We have lots of duplicated and this would be awesome.

Wow! Three years later and this basic functionality still not here. Bummer. How is an organization supposed to manage their database without being able to easily clean up properties? To do that we need an export or report. Hubspot sells a lot to smaller orgs so this should be a very high priority. All their major competition does this without effort.

We would need this too. It would be also great to get additional info as field type and how many contacts/deals/tickets are using the property.

+1 for this higly essential HubSpot feature

I would love this to be a feature as well! Trying to clean up our data and sync between HubSpot and Salesforce and would love a way to look at it from a high level.