Would be helpful if you could edit the name to a campaign. It is currently uneditable

Hi all, thank you to those that helped us test this feature out, I'm pleased to share that it's now been released to all portals. Let us know if you have any questions or feedback.

Hi all! As Joe had just posted, we've just opened up a beta allowing renaming of Marketing Campaigns. As impossible as it might seem, we've been chipping away at this feature since my last update, almost non-stop. This update required us to completely re-engineer how a lot of the core structure of Campaigns worked, to allow us to divorce the campaign name as the primary ID for the campaign.

The result is that it is now possible to rename a campaign, and while we've done our best to ensure that the current behaviour of Marketing Campaigns is still intact there's still a possibility that some reporting data could change when a campaign name is changed. As a result, we'll be taking this beta somewhat slow to ensure it works as expected.

All that we ask is that you let us know here if anything doesn't work as expected or if there's anything missing you'd like to see.

A quick rundown of what you'll find when you get access, clicking Actions > Edit on any campaign will now show a new sidebar panel where you can edit all the details of the campaign, including the name: 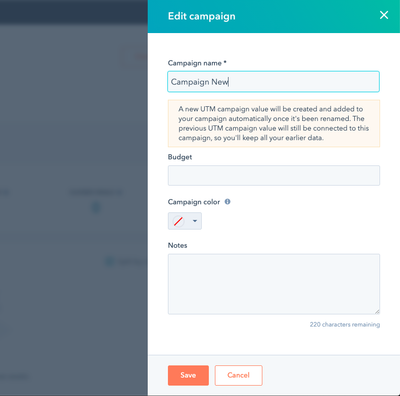 Requests will be actioned once every business day, so it might take a day before you see the update in your account. Please let us know if you see any issues as you try it out.

Hi all, have an exciting update for you here, this is actively in development and should be live in June. We're not quite at the beta stage yet, but not far off and when we get there I'll open it up to you all.

An explainer on what this will look like, today the campaign name in HubSpot direclty links to the utm_campaign for tracking URLs, that's how we know how to match the two together. This has meant that renaming a campaign would cause historic data to be lost. What we're working on is the abiltiy to rename a HubSpot campaign and associate an additional utm_campaign with it matching the new name.

Additionally, I'd love to learn more about how you're currently using the Campaigns app and other places we could improve. If you have a little time I'd really appreciate if you could check out this survey and share your thoughts: https://www.research.net/r/campaignsfeedback052020

Thanks again for your feedback.

I agree with you here, it's difficult to organize campaigns when they use different naming conventions.

We can rename virtually everything within hubspot with the exception of a few key things.

One of those is a campaign.

It is frustrating when we make a campaign and name it after a persona and a downloadable offer, then after some time spent writing blog posts realize we want to change the offer for our campaign but cannot rename it to reflect the new offer d/l !

I agree. I would love to be able to adjust goals. Sometimes these 3 goals don't best depict what we are trying to accomplish in a campaign. Thanks.

You would do us a HUGE favor if you could enable the ability for us to edit campaign names.

I realize they stay in place for tracking purposes, and adjusting the names would ultimately influence the URLs that are being associated to those campaigns, but even if you could create a campaign "API Name" which never changes, but the actual title in the campaign manager is editable.

We're trying to establish a naming convention for all of our campaigns to keep them organized, but I can't go back and edit old ones, so I'm stuck with inconsistent naming conventions for historical campaigns.

I fully agree! For us it would be helpful to see the generated MQLs, not the customers. In the end, yes, a possibility for customazation would be necessary.

Agreed! Beyond just editing the name, it would be great if we could merge 2 or more campaigns to group data when it doesn't make sense to have them separated anymore. I'll create a new idea for this.

This would be very helpful! When we first started setting up campaigns we didn't have a set naming convention, now that we do it would be nice if I could rename so that everything is consistent.

This would be super helpful!  Sometimes the first idea istn't the best idea for a campaign name.

This idea looks like it has lost some steam...but this would be super helpful!

This feature would be extremely helpful. I can't believe we cant edit that.

How is this not implemented yet? So cumbersome to do any type of platform clean up and implement new naming conventions without this functionality. The campaigns tool has so much promise but comes up just short enough to be ineffective. Come on HubSpot! I know you are reading this.

Just wanted to reemphasis that this still would be helpful! Thanks!

It seems like an oversight that this wasn't in there from the beginning. I'm transitioning from one person managing HS to another and its not great to saddle them with a naming convention system that doesn't make sense to them!