Deals - Automatically Associate A Consecutive Number To Each New Deal

The issue we face is that we may have the same company, with the same contact, with very similar deals running at the same time (for different projects etc) so these are easily confused.

Though each deal is automatically associated with a Deal ID (which appears in the URL), it is unsearchable, and it is an 8 digit number which is not so user friendly. It would be good to have a field with an auto number calculator or something similar, which is searchable, and auto added to each deal when it is created in a consecutive sequence.

Could Hubspot add an 'auto-number-generator' as an option for deal creations?

So, the feature that you are looking for might already exist in some way. When an object (Contact, Company, Deal) is created in the CRM, they are automatically associated with an ID number which allows us to recognize it as unique in the back end. For Deals, for instance, each deal in your CRM has a unique Deal ID which appears directly in the URL for the deal: 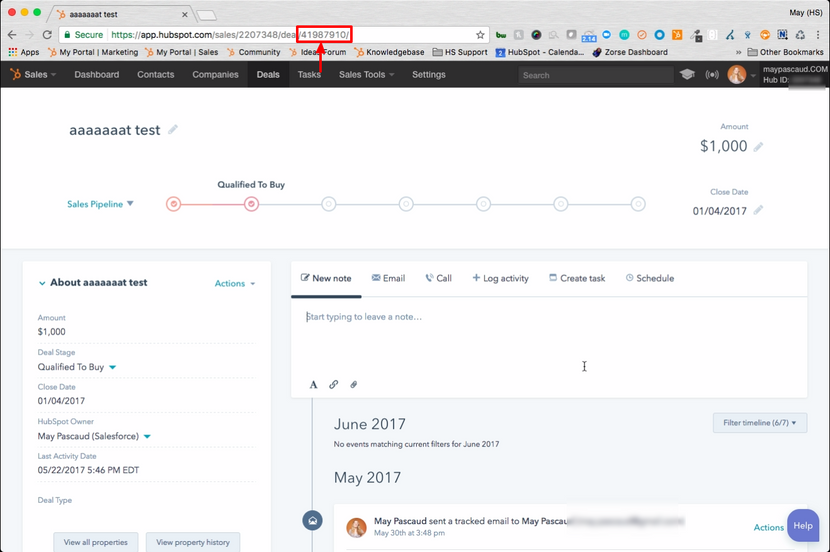 Would using this Deal ID be helpful in identifying the deals in your process? You could leverage the Deals API if you have development resources, for instance, to get all deals in your portal by their ID: https://developers.hubspot.com/docs/methods/deals/get-all-deals

Let me know if this is helpful!

Thanks for that, and yes we had considered it. But unfortunately it is unsearchable, and it is an 8 digit number which is not so user friendly.

It would be good to have a field with an auto number calculator or something similar, which is searchable, and auto added to each deal when it is created in a consecutive sequence.

I trust I have explained myself?

Hi @Trent, thanks for the clarification, that definitely makes sense - I just wanted to make sure you were aware of this potential workaround. I've updated your original idea to include the additional context you've just provided.

This would definitely be useful - especially if it was built into the Salesforce integration so the connector is prevented from creating duplicate Deals. We ran into this issue two years ago and it doesn't look like there's been an improvement implemented yet.

FYI there's another idea post that seems to ask for the same thing: https://community.hubspot.com/t5/HubSpot-Ideas/deal-id-search/idi-p/15493

This is a feature that we've also been asking about for the past year or so. Our legacy database had a field that would generate a unique ID - it was a 4 digit number but as other users have noted it would be great to have the flexibility of it being a combo of letters and numbers if needed.

Can the votes for this request be combined with these other similar requests?

I agree, it would be nice to have an automatic, sequential, searchable numbering system.  We would like to setup the parameters so it can be a seamless continuation of our legacy database 20+ years in the making.  4 digits or more.

Hi, I will vote for the Auto generated Deal number and searchable. WE deal with thousands of channel partners and a unique deal reg number is essential to sort out the fighting over a particular e/u deal.

Any idea when this wil  come out??

Is this close to becoming a reality??  Seems to be needed by several users.

Interesting. I am close to migrating to another system which offers this facility. It will be a nightmare as all my deals etc are in here. Ive been currently inserting my own deal ID which google forms generates but ideally only want to use HUB. Is there a time scale set?

I am looking for something similar but would love to be able to pass in a Deal Id in the API when creating a new Deal in Hubspot from a downstream system that has already generated the unique idea used across our enterprise. We currently pass this in as a custom property on the deal object but it then allows for duplicates in HS API submission (and you cannot search for a Deal by our custom property). Ideally our own Deal Id would be sent in the Deal Create API call into HubSpot.

We also require a unique deal number. Hubspot creates a 9 digit deal number but this is not exclusive for us, I think this is for all over the users in hubspot.

I created 5 test deals and numbers are as below:

I'm happy to let you all know that Deal ID is now included as a property on all deals. This ID can be searched and used in views, just like any other property. The Deal ID is generated automatically when a deal is created, and will be created in sequential order. This ID is also uneditable. Please feel free to post on this thread if you have any questions!

This is definitely needed, its becoming a nightmare to manage without a deal number that can be auto-assigned or created. I will be looking to exit the platform if something cant be sorted on this front as impossible to manage deals without everyone sitting next to each other which is not feasible considering my company is spread across multiple countries.

Hi @acumen - please see the post above, this is now live in all portals. The property is named "deal id" and it is on each deal! It is also searchable and sortable.

This is now available for all users - details are available in this Product Blog Post.

The critical missing step (at least for the way we need it to work) is to utilize this ID in the Salesforce connector, so the integration doesn't create duplicate Deals every time it tries to sync, like it does right now. Definitely a huge step in the right direction though!

I would like to point out that this thread is marked as delivered but it is NOT.

The problem solved is a unique ID to avoid duplication, NOT a sequential 4/5 digit number increasing with each new deal created.

I really would like a sequential , human useable number to be generated with each new deal within a range of contexts i.e. across company or within a given pipeline etc.

I definitely agree with JasonTisdal above! Team HubSpot seems to have serious difficulties in getting to the root of the problems. The deal ID (and IDs for all other objects) are naturally essential for the BACKEND use, for example, when using API integrations – yes. BUT they are completely useless for the sales teams. From an operational perspective, sales teams need a simpler, human readable deal numbering system that can be custumized based on the needs and requirements of their business and sales processes. And this shouldn't be that hard to implement.

Once again, as I've been mentioning in all my other posts, a simple to implement yet essential feature that is missing on and missed by HubSpot. It's hard to understand that a CRM that is also sold at enterprise level lacks these functionalities. As it is right now, HubSpot is only good for simple businesses that only sell through digital channels – but not for complex SalesOps.