We're, or at least I'm not, able to see any data on the contacts that are being synced between platforms.

With PieSync, you can see the following:

HubSpot Data Sync doesn't have any of this information, that I know of.

I understand that PieSync will be active until the end of the year but is this on the roadmap to be included within HubSpot Data Sync?

I do see that data is getting synced by going to each tool and comparing data after some period of time. But it feels very MVP atm - which is fine given that it just launched. 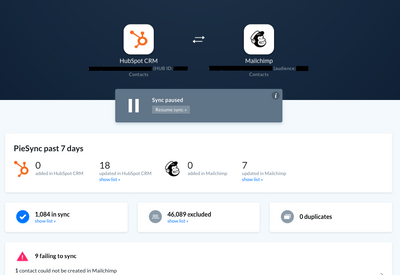 Health is now live! You can see it on your data sync connections.

Thanks for submitting this idea. We are actually already working on a first version of Health for Data Sync. Stay tuned!

Thanks for submitting this idea. We are actually already working on a first version of Health for Data Sync. Stay tuned!

Any update on this? Or alternatively, any good workarounds to determine why something hasn't synced in the meantime?

we have been a long time user of cazoomi (for sync between netsuite and  other systems)  - unable in this instance because opportunity sync  not an option  - they provide full audit trail of records processed via a GUI + email  - surprised not an option here.

Health is now live! You can see it on your data sync connections.