I would want to see a way to override the deal stage percentage value and give the salesperson a way to give his personal estimate/feel from the interaction with the customer. There are cases that customers will progress in the funnel as expected but in complex sales (B2B or others), there are many cases where people will be very active - so progressing in the deal stage activities , but despite that, the salesperson estimate that the close/win probability is lower than what Hubspot will let it be by the deal stage.

While I can do it using a custom field, it won't be included in the forecast with its weighted value so it won't be helpful.

Check out www.quarterone.com - I beleive this resolves the issue

Absolutely, that’s really needed here, too. Although the automated weighting in many cases reflects the actual probability of a deal to be won, there are reasons why sales reps need to be able to give a deal a different weighting.

a) tenders (alhough all deal stage steps have been completed and the formal quote is submitted, there may be dozens of quotes submitted by competing companies thus the sales rep needs to give a lower probability percentage to minimize the financial / mathematical impact that deal has to the pipeline

b) large deals = high risk to the pipeline accuracy (even 10% of a million € is still a lot of weighted volume. If you have several of such deals it truly impacts the pipeline value thus giving the sales reps the option to set such high risk deals to 0% is crucial. NOW imagine, you only have the Hubspot auto weighting percentage and have reached the negotiation deal stage that is at 50% or even higher.)

summing up: I would even go a step further and separate the deal stages from any probability percentage and leave it completely to the team involved in a deal.

Logically, such percentages have to be used when calculating the pipeline thus reducing the expected net revenue.

I am writing the latter here because I feel it needs to ve written as often as possible since a nice property field that then is nothing more than another value/info is not helping here.

Same applies for the still missing „Partner Discount“ field which is so basic to pipeline module of a CRM, that no pro would even look for it during an eval.

Yes - I have a field called likelihood of closing - where salespeople update at each stage what their sense if of likelihood to close. If I could use this for the % weighting instead of the default, the forecast report would be far more useful!

Thanks @Dylan for letting us know about the feature.

It is still connected with the deal stage thus calculates the weighted amount automatically which is half way of the distance.

It is important to disconnect the probability from the stage in order to have full control.

eg a public tender and / or a competitive quote after having made it to the final three solutions.

In this case still everything is possible and a 30% weighting will fit better that a 50% or higher.

In such cases or very large deals, the freedom to give it even 10% to not make it manipulate the overall forecast is really important.

It does not help a lot that we can now say that quote submitted is x% for all deals. Some are standard or low risk then the computed weighting works but for the other cases it’s half the solution.

Sorry to be the party crusher. What you do is good but the last x% are missing here.

solution: Give us a probability field at deal level which has the power to iverwrite the computed values (if computed doesn’t match reality)

I agree completely with Arne.  We need the probability field at the deal level that overwrites the stage probability.

I've set up a process between hubspot and zapier - whenever the value and/or the custom probability value (a deal property) is updated, this triggers a workflow, sending a webhook to zapier, which then calculates the weighted value (amount X probability %) before sending back to hubspot as a weighted deal value.

This can then be pulled into a usable report.

Yeah, it should be possible to override the stage % on a per-deal basis.

Hi @dave_heywood88 - great process! Would you be able to explain how you set this up in a bit more detail please? Thanks!

I set up a new deal property called - Weighted deal value. I also have a deal field called probability of closing (which is more useful to us than arbitrary close %'s based on deal stage)

When the probability of closing is updated in the last day, a workflow 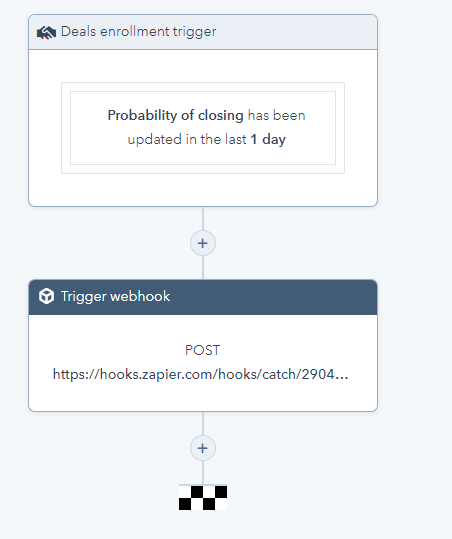 Zapier then catches the hook, and performs a number calculation (deal value X probability of closing e.g £100,000 x 20%). Zapier then looks for the deal by the name and subsequently updates the weighted deal value field.

Only thing to be aware if is that in zapier i'm unable to look up a deal by it's ID number so each deal needs to have a unique name to avoid any issues!

If calculated fields didn't require an enterprise sub, doing this in hubspot would be even easier...

When will this be implemented?

We are coming from Pipedrive platform and this is a functionality that we are really missing.

Still looking for the ability to customize weights for the deal, not for the stage.

Not every deal in stage 7 will be weighted the same way.

Not every deal in forecast category "probable" will be weighted the same way.

The need to have this on the deal level still remains.