Currently, according to this KB article, there are certain set rules for activity associations:

There are a few exceptions to the above. For example, an exception is that emails sent and calls made from any object record will also be associated to the relevant contacts that were being emailed or called.

These rules are not very intuitive for many users. For example, see this thread https://community.hubspot.com/t5/CRM/Associating-contact-activity-to-specific-deals/m-p/308086#M1171...

It would be awesome if we could have a toggle that allows users to be able to toggle automatic association of all activities for the associated contact/ company, or specific associated deals/ tickets.

Thank you all for this additonal context. This is very helpful for us to understand the various use cases.

The irrelevant associations really clog up the company and deal records. Not only that, but sometimes they can cause a deal to close incorrectly. If we were able to choose what automatically associates to an activity, that would be much more functional for us.

Hopping on here. When I'm in a deal, create a new email within the deal, and therein assign a Sequence to a contact, none of the activity shows up in the deal! This is acutely inconvenient and anti-user friendly. I really hope it's high pri. I cannot imagine this is a fringe case I'm talking about here. Thanks.

Currently, I have to manually check the activities added by the sales team into a deal, and go one by one and associate them with the contacts and companies, as I do have to understand all engagement that has been done with the contact. This takes so much time and it's not productive.

Hope you have news on this soon @Anonymous !

This associations preference would be so easy to turn into a software interface, just turn the chart in this KB article into software with a grid of toggle boxes: https://knowledge.hubspot.com/crm-setup/associate-activities-with-

Chart shows how automatic associations are set up, and a grid of toggle boxes within HubSpot could allow you enable/disable default associations for associated records on new emails/notes/tasks/etc. 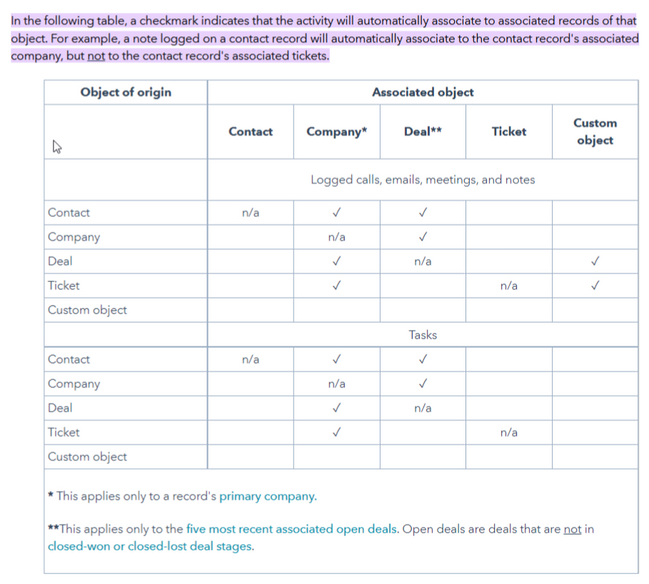 And in addition to my last post (where I showed a screenshot of a grid where you should be able to decide which objects automatically select activity association):

These automatic associations should have the option to NOT associate anything that's defined as "Closed/Won/Lost".

(Much like the Deal settings with the ** note, but with more control)

For these custom objects we NEED the option to automatically associate emails/notes to custom objects. But we need the control to NOT associate them to "closed" objects.

So rather than a grid showing a simple "On/Off" checkbox, the grid options should be "On/Only Open/Off" with the Deal+Contact/Company cells defaulting to "Only Open".

Adding on to this thread:
The current default behavior for logging activities to tickets is that the activity will only automaticall associate with the associated company. It would be great if we had the flexibility to select which objects we want these activities to automatically associate to 🙂 Currently customers have to manually associate logged tasks/notes etc on tickets with contacts, which is tedious. Thank you!

Yikes! I can't belive this has been an idea and known issue for almost THREE years now (maybe longer?) and with 70 upvotes and all these examples has not been escalated as a higher priority. We just started using the full suite of HubSpot in May 2022. The activity auto-associations and the logic in the KB article is poorly designed and causing huge headaches for our Commercial team. So much unrelated activity across objects and it's gettin harder and harder to shift through. It will cause us to miss something soon (a RFQ, an order, a support request).

We agree that having the ability to choose what to associate or having some kind of toggle on/off feature within the associations dropdown would be better than all the manual unchecking or manual linking we are having to do today. Our Sales team is losing faith in the HubSpot tool. Hope this issue gets resolved sooner than later.

Contact A is a buyer for Company A (and therefore are associated). Company A has:

Beyond that, any apps that pull deal activity feeds have no way to filter this out so it must be done on the HubSpot side.

Seems like a simple fix would be to add a checkbox when associating EXISTING objects to other objects on whether you want activity feeds included, similar to the checkbox when you create a NEW object within another object here.

Our company is dealing with similar issues. And, after reviewing a number of other discussions, several others are dealing with this too. Seems Hubspot hasn't done anything about a problem lingering since at least 2019.

we are thinking about starting a kickstarter campaing to get hubspot under preassure to sort this out!
Super crazy, I know, but hey, if it helps...

Who'd join in with a few thousand?

This is also a big issue for us. We utilise custom objects heavily and not having activity auto-associate to those custom objects is quite a headache and causes more manual work for most of our teams.

We definitely need the option to change primary association for notes opened from within deals; we need them to always associate with the contacts rather than the companies, and when we're creating a deal within a workflow we'd like to be able to carry the association between the first deal and the note to the new deal and the note as well!

and still no Hubspot member commented on this.... quite a shame

I can second the sentiment of a lot of the previous comments: THIS FEATURE IS ABSOLUTELY ESSENTIAL.

With the current system it is way to easy to oversee an action that has already taken place because it is stored in a different object. With highly personalized and long-term sales cycles this can be detrimental.

We need our chats to log to the associated company. The associated company shows in the chat window. Chat from "Jane, Marketing Director at Company A". So, it doesn't make sense that these aren't logged to the company record as well as the contact record. Most of our companies have multiple contacts and you need a holistic, combined view of their sales & support chats.

Commenting here for one of my customers: This would be such a great idea to toggle on and off what associates and what doesn't.

There are a lot of times when an associated company doesn't need all the timeline activity from the associated contacts, being able to turn off for instance, tasks, would be great.

Hello! Chimeing in here because some solutions are definately necessary. We are having emails that should only be associated to a Ticket end up being associated with a Deal because of a shared contact. This is filling up the Deals Activities with unrelated emails. It's  creating a lot of work for our Customer Service team when  emails sent to them are being linked to Deals. Even if they go in and un-associate the ticket with a Deal when it first comes in, any  additonal correspondance on the same ticket is automatically linked forcing Customer Service to unlink every email that comes in. There is got to be a better way to do this. I will write more but I just wanted to get another voice on this important thread so HubSpot will consider looking at a solution to this issue.