Clone attack is working well for us!

Joined Hubspot not long ago thinking "Oh I'll get off the spreadsheets..." only to realize it takes me almost twice as much.... Cloning is a feature that you CANNOT deal without ! Especially in a company where some clients may have multiple locations but not all at the same stage !

This is critical for managing my team efficiently.... none of the employee will buy into the switch to Hubspot unless it is easier or at least as hard as before.... !

We use the Duplicate deal widget from revLABS. And we are quite satisfied the way it works. it is the best alternative for not having the option to clone deals ;-).

We need this function.

Needing it as well

This is the app we are going to use, I ran it by IT and it looks good.

Thanks for the shoutout @Pauldeming! Here's a general link to get Clone Attack.

Thanks for the love @SkeeStylus !

I have dealers that want to place the same order they did before or similar orders and cloning a deal would make this so much easier.

Cloning is a extremely very important feature! Others CRM already do it... so please HubSpot, hurry up with this. 🙂

We have been using clone attack for a few weeks and it works fine.

Could you make it possible to clone tickets too.

So a simple tool to clone deals and tickets. 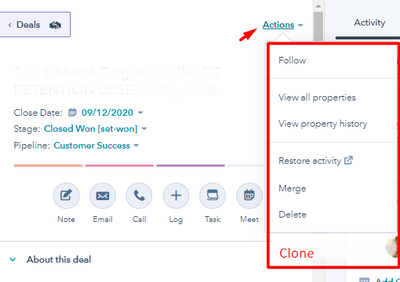 @nona  check out @Daxchemist 's   Clone Attack in the App ecosystem.  It not only works for deals but any object in Hubspot.

Would love to have this functionality.

@bashomosko Just shot you a PM!

For any Zapier users out there, I SOLVED THIS PROBLEM, at least for our purposes. Have a look:

You could also add another step that emails the user when the deal is done being created with a link to the newly cloned deal, but I haven't don that yet.

Also, you could do this process multiple times, but just switching the Clone Deal property back to "No." Saving the deal. Then Switching it back to "Yes" and saving again.

Background on how we use it:

Our painting company will create deals when a customer calls for an estimate. Frequently, the customer is in need of multiple services for example carpentry, drywall repair, and interior painting (we abbreviate that with "CARP DRY INT" for context). We want to keep those three services as one deal initially because the estimator is going to the house one time to give an estimate for all the services. However, once the customer excepts the deal we want to be able to split it into three separate deals because often times we need to schedule and produce those deals months apart (especially if there is exterior work that is weather dependent). So our estimators need to duplicate the original deal three times, and literally everything is the same except the project type, and the dollar amount.

Hope this helps someone out there!!

This would be really helpful for us. When a sales person wins a deal it needs to be cloned into our services pipeline to be managed for delivery.

It's ideal for the delivery team to not have to recreate the deal every time when all of the required fields are included in the sales deal already.