@SusanH I purchased this Revriv app but can't figure out how to connect it to Hubspot. Any tips?

Hi Jeremy,  I downloaded the free version (which I believe is good for one person - if you want more than one person to access, you then need the paid).   All I did was go to the marketplace (little store front icone upper right of the black menu bar) and search for it. Once I found it I just connected and followed the process.   Hope that helps ...

@SusanH i think it may not be available anymore...can't find it anywhere in the Marketplace.

Any chance you could send me a screenshot of what it looks like in the Marketplace, or on your deal record?

here's what it looks like once connected in hub.  On 'deal' page ... in my 3rd column bottom. 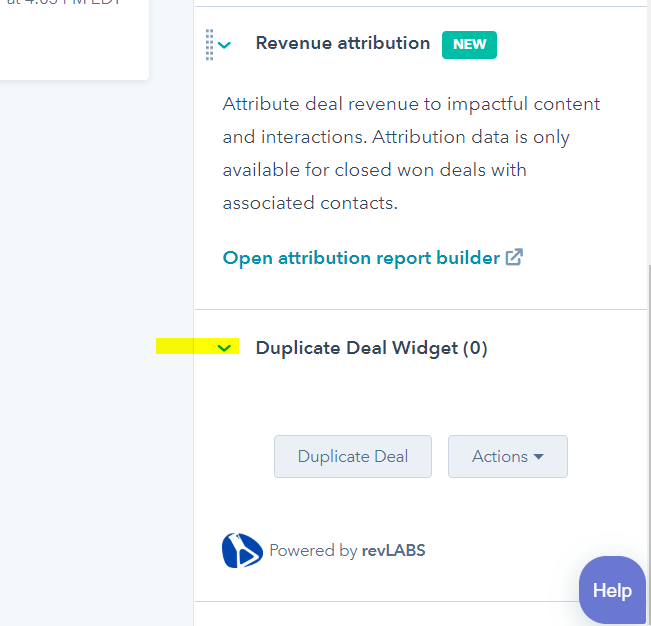 Within Hub... once connected

Thanks @SusanH - I think this has just been removed from the Marketplace. Oh well! @Dylan please hook up this feature!

If you add the widget from the link on the company website instead of the Hubspot marketplace you should be able to install it.  Looks like the company just changed the page for the widget to mention that it is a beta product.  Works great for me.
https://www.revenueriver.co/revlabs/duplicate-deal

FIXED: The email with a link to connect to Hubspot was in my spam folder.

This is simple enough and seems to work. Thanks for the rec!

Hi, I can't buy a subscription. I can only select the US when registering. Is it available for other countries?

I think someone else had mentioned that it was only available in the US.  The version I got was the free one... not sure if that is available outside the US either.    Try contacting them to inquire: https://www.revenueriver.co/

The revLABS Revenue River widget app DOES work to clone and does give the option of whether to include the products which therefore carries over the revenue fields so THANK YOU.  This is the solution I for one needed at this stage.

Crazy that something so simple, basic and obviously very much needed by subscribers was so complicated or not relevant enough for hubspot to add.

Glad to hear it!!   This widget is just a temporary fix and who knows how long this will be available as it's a beta product.  Hubspot should still be on the hook to give us this very basic CRM functionality.  We should not have to use an outside widget to do the basics.

I would use this feature every day if it was available.

Brand new to HS - we moved from Pipedrive, have been putting it off for a couple of years, but have bitten the bullet!

Can't believe that there isn't a way to clone a deal - how does anyone deal with renewals without being able to clone an existing deal?? We've closed/won around 7 deals since using HS - in Pipedrive, I'd have them duplicated the deals into our renewal pipeline, set sales tasks for renewal close and that would be it. So far, I haven't found the time to even create the 7 new renewal deals that I need to do - to do this, I would need to have HS open twice on my browser and keep going from one to the other so as to be able to copy the details across.

Seems crazy to me.. is there any business using HS that doesn't have MRR/ARR??

@Tamarbeck1 you can use the workflow engine to automatically clone the deal based upon the criteria and triggers that you set. However, Products are not copied over. Other than that it generally works fine.

@Tamarbeck1 We went through the exact same move 14 months ago... What was just 1 click in Pipedrive requires quite some workaround in Hubspot.

The most efficient way I found to avoid simple copy and paste or click click click marathon, is to download a deal from Hubspot, then change what you want to change (for example the period) and then reimport the new deals via the Import function.

Quick heads up: be careful with the import, Hubspot doesn't have the same function as Pipedrive, you can't easily revert an import, you'd have to delete all deals.

Hi, Many of us are using an external tool that you can integrate with Hubspot that will clone deals.   Check it out... a good fix until Hubspot gets their stuff together and gives us basic cloning functionality~~

Would it not make sense that clone woudl just create a new deal with ALL details from the cloned deal and present said deal just prior to saving and thus the user could alter/delete as required?

A question to everyone, as we have the same problem.

I am asking this as we are considering building something.

@jahson01 yes, we charge our customers via stripe, and upon a successful transaction we create a deal using hubspot api (we also create an invoice in freshbooks since unfortunately hubspot cannot create invoices and we extend our customer's saas account via our own api). We can then use the deals to create our own custom reports. We have our own piece of middlware that connects all the pieces. Commissions for reps we have not yet solved, happy to hear if you have ideas.