Submitted by Arne on ‎Feb 24, 2019 4:12 AM
We are working with clients in 70 countries including Germany, Austria and Switzerland which adds a level of complexity since we do not only have to identify the right gender but also need to select if a last name is German thus using Herr / Frau (English: Mr./Ms.).

The forms we use do not ask for salutation and we wouldn’t want to add yet another mandatory field that contacts have to fill.

Also, I have created a list with the top3000 German last names.

My plan is to check the following:
- first name is in one of the female/male lists IF not found, don’t set a salutation.

A) IF only in International male/female first name then everything should be clear and we add the respective Ms. or Mr.

B) IF the first name is in both lists (e.g. Diana) THEN check the German last names (Schmidt) for a match.

If her last name is not on the German last names list, we would either not fill the field or set it to Ms.

I have all those nice and extensive lists with thousands of names. I have imported them into custom properties using radio select field type and try to actually build the workflow.

What I am struggling with is the combination of check first name, compare with list A, B, C and the German last names.

Anyone with a similar challenge and a solution?

If not, adding such first name, last name list for recommendations on gender and language dependent salutations would be a great functionality to add to HubSpot.

Alternatively, the freedom to make such checks across multiple list in an easy way would be great.
See more ideas labeled with:
6 Upvotes
HubSpot updates
3 Replies

for this DACH specific case I am outlining a solution in this video.

Hope it is useful!

we have the same problem.

We are working with 40 countries and I have a list of 96 rules to create a salutation. There is no idea from hubspot side to copy a content of property (e.g. the last name) as a part into another property. E.g. Dear [Mr.] [Lastname] to use one field in the e-mailing....

My idea is to create a richtext module and make it smart and put it into all e-mails. Then I can use is in every mail.

To create the smart rules, I would do it like in Sabines video...

I have voted for your idea!

following up with your comment: Maybe you have this already in use, but it is now possible to copy the content of one propety into another property using workflows. In your case, you can create a single line of text custom property, e.g. "Entire Salutation" and then set up a workflow and choose the action "Set property value", choose your custom property and then you can add the contact tokens of your choice: 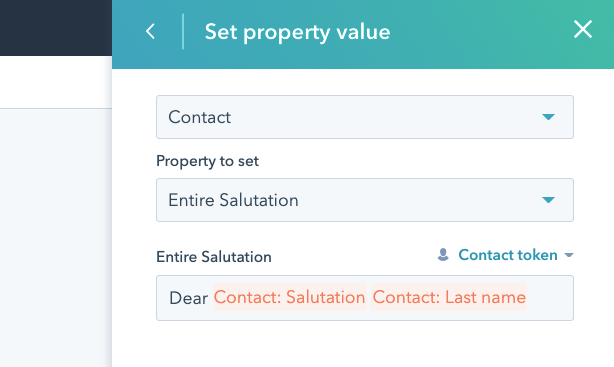 Is this what you meant by it?