Issue: Tickets Owner and associated Conversation Assignee are not linked.

Use Case: Our support team rotates who is on call. Whoever is on call during a specified period of time will answer incoming client issues for that period. To facilitate this, we have the Conversations Inbox set to unassigned for new incoming messages. We also have it set to automatically create new tickets, which also have the ticket owner as unassigned. If a support rep claims a Ticket they set themselves as the owner, BUT the associated Conversation is still shown as unassigned.

As a result it diminishes our team's ability to work out of both the Ticket and Conversation areas concurrently, as ownership of something in one area is not reflected in the other. This reduces the usefulness of the Conversations Inbox.

Solution: When an unowned Ticket (automatically created from a new Conversation) has it's owner set, also assign the associated Conversation to the same user.

Very good idea and fully supported by us.

Is there any progress on this solution? It seems like something that could be built out and put in place quickly.

100% upvoting this. I ran into this issue in our setup. It was painful to operate the service desk without a clear way to filter for tickets with response from customers.

Create a ticket based workflow.

Last customer reply date is less than 1 day ago

Hi, I would love to have this feature as well.

This is a feature that needs to be part of the conversations inbox - otherwise the filtering tool has little purpose.

Upvoting this request to associate the Ticket Owner and Conversation Assignee, it is absolutely needed!

I am also voting for this enthusiastically as several customers have asked for this!

Thanks so much for the feedback. We are currently looking into this issue, so updating the status. I will provide more details and a timeline as we dig into this.

I am curious about a couple of things and would love some input as we think through this problem.

1. Would you always want the conversation owner and the ticket owner to be the same?

2. If not, what are the use cases that you would want the owners to be different between conversations owner and ticket owner?

Feel free to email me at cdewey@hubspot.com to chat in more detail about this issue.

Thanks in advance for the feedback!

@cdewey22, for my team, yes I would always want the conversation owner and the ticket owner (ticket associated to this same conversation) to be the same

Upvoting! This would be extremely useful.

No apparent use case for our service that as yet would require a different assignee to the ticket owner. If the assignee changed, the ticket owner would then also change, i.e. they should not be decoupled.

@cdewey22 I'm pretty sure we would always want the Conversation to be assigned to the same user as the associated Ticket - I think the goal should be to be able to use the Conversations Inbox and Ticket board/table views in tandem.

To that end it would probably be useful to have also have an "Associated Ticket Pipeline/Status" filter here: 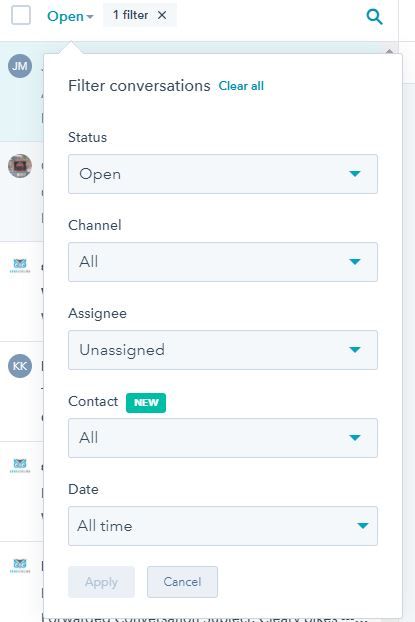