Our company sells through resellers. We started creating the deals and associating it with the end customer, so we can track where our solutions are installed and in case the end customer calls our tech support center we have a way to identify it.

We need to be able to view all the deals by customer, but also by reseller, so we can properly support our resellers and follow up with them on time.

So far we have created some text fields to identify the reseller (partner) and the contact within the reseller who is leading this sales opportunity, but haven't found a way to perform a field search to select the reseller company from the existing database.

We can associate the reseller contact to the deal, because you can have more than one contact on each deal, but it seems you can only associate one company to each deal; therefore, that information requires an custom field, but none of the custom fields are able to search the DB.

I am sure we are not the only company selling exclusively through resellers, so having the ability to add a reseller to each deal and view the deals by resellers would be of great help.

Please let me know if you need any clarification.

I am working on solving this same issue.

Currently, my intended workaround is to create teams for partner resellers and then I can sort by that.

Has anyone tried this?

Run into any trouble with it?

Same challenge.  Even if you change the "Partner / Reseller" field from a text box to a dropdown, the dropdown list has to be manually maintained, and theoretically should be a field on the Deal and the Contact record.  Double maintenance.

A 'company lookup' custom field would help solve this one, I think.

The ability to assocate a Deal with more than one Company.

Working on the same issue, and so far no luck. I've tried a few things per the suggestions above:

1. Using Teams - There are a couple of issues here. First, I don't want to create HubSpot users for every reseller. That's a giant administrative headache, and I have to manually set up access restrictions so our resellers can't see other leads, can't import contacts, can't send emails, etc. Second, I can't add teams when creating leads. The "HubSpot Team" field isn't an option when selecting which fields to show when creating deals. 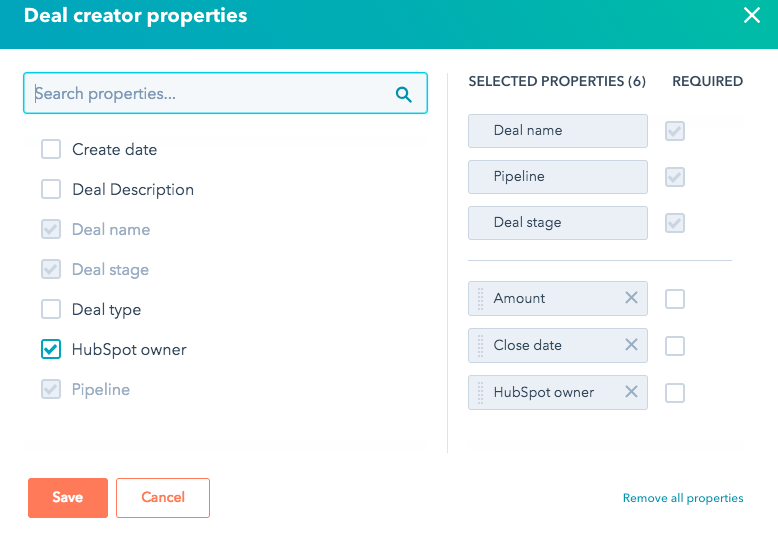 2. Using a parent/child relationship - If I decided that every reseller would be a parent and each customer the child, that could work. However, if I do that, there's no way to distinguish between actual companies that have a parent/child structure vs. a company that has a reseller. That won't work.

Should be easy to add a lookup formula that only shows companies that have type=Reseller. That way any time I add a new reseller as a company, as long as type=Reseller, I'm all set. Nope. Not an option. No lookup fields.

Looks like I have to create a dropdown that lists the name of every reseller. That means every time I create a new reseller, I have to add that name to the dropdown options. It's manual, but it should work. Unless, of course, there are multiple resellers on the same account. That won't work.

It's still manual, but this way I can select multiple resellers for every deal. That means I have to remember to keep this list updated every time there's a new reseller. Unless there's a way to use an automated workflow to add values to a list....nope.

Now that I have the company issue "solved", what about individual people? Within the deal record itself, I can add any contact I want. However, I'm not sure how I can report on things like:

This seems like such a basic thing that is part of many sales processes. I was really hoping that we could use HubSpot as our CRM, but if we have to do the basics manually, I'm not sure it's worth it. It's too bad.

We have the same problem and i've come to the same solutions, but none of the above are great solutions in my opinion.

Please HubSpot, work on that!

Not sure if everyone is using the free verson of Hubspot or the free version.  I have this some what working for a startup a consult for.  We did purchase sales hub and custom field.  I have a reseller registration setup that captures end user deal information as well as a pull down to collect who the reseller is register as well as the reseller rep contact information including first name /last name and email address. Then run customer report and have a dashboard widget  for each reseller. The channel managers then export these reports to spreadsheet and send to partner sales manager to manage to channel sales.  You easily see sales by partner , top partner and top partner rep for contest etc.  I also set this up in sales force workflow for another client with Sales Force Professional. It was much easier to automate since reseller lead forms could be converted to opportuties. Also it would kick off a work flow to have our rep approve or reject reseller registration. If it was approved it would then convert the lead to a opportunity with reseller info. I am struggling on how it get the same level automation with Hubspot as information goes to contacts and cant find a way to have it to convert to hubspot deal.

Hi - Just checking to see if anyone has made any progress on this issue over the last few months?  Im trying to formalize how we will manage our partner program and struggling to see a clear solution as evidenced by the issues above.

Hello Ikenny I did create a solution for one of my customers in Hubspot.  Its working well not 100% automated but close.  I would be willing to chat with you in PM or email. Wayne

I would love to chat with you!  Please feel free to email me at lkenny@wasabi.com.

Yep, we're in the same position. selling through partners. Coming up against all these problems.

Newbie to HubSpot but trying to figure this out too. Since deals can have multiple Contacts, what if you created a dummy contact record for the reseller e.g. first name = "Reseller XYZ" and associate that dummy contact with appropriate deals? Doesn't feel as clean as being able to have more than one Company associated to a deal (something which Pipedrive supports btw) but seems like you'd be able to do some decent reporting and not have to deal with a custom property...but I'm sure I'm missing an obvious reason why that wouldn't work...

@EWH1 I would be happy to hear how you were able to resolve this challenge too. pille@alloysoftware.com