I'm not sure what happened in the latest extension update or Google Chrome update, but Hubspot Sales extension hasn't been working for me for several weeks now. I've just been hoping that it would fix itself since it broke during an update on its own, but it's never happened.

Now, when I click the extension, it just gives me a sad face with the following error: "app.hubspot.com refused to connect."

Does anyone know what may have changed recently that could have contributed to this no longer working? I've gone through the troubleshooting link and have tried all of its suggestions, and nothing works. I've disabled every other Google Chrome extension as well, and still nothing. I've tried to reinstall the extension with no success.

In Gmail, the following error comes up when I click on the Hubspot icon within Gmail: "

Sorry. It looks like your browser settings are blocking HubSpot Sales.

To learn how to change your browser settings, please read this article. Then, come back here and reload Gmail."
Another thing that I noticed on the troubleshooting site is that it says: "

It is not highly recommended to update Chrome to the latest version . "

Is that a typo? It's not recommended to update to the latest Google Chrome version?

I can also confirm that I can access app.hubspot.com:

I have even reset Google Chrome back to its factory settings, and the extension still doesn't work.
Extension Setup
Options
Reply
2 Upvotes
25 Replies 25
Highlighted

Thank you for all of the information!

I am seeing that "It's highly recommended to update Chrome to the latest version." is the text in the article you referenced. Are you seeing something different?

Do you mind sending along screenshots of the errors you are seeing?

Additionally, are you able to access the extension in an incognito window? Additionally, can you access it on different internet connections?

If you can send along screenshots that would be great! Additionally are any other users in your portal experiencing this issue?

They literally just updated that text. I swear. I copied and pasted the original text from that page a few days ago. It's updated to reflect the correct thing now. I was able to get his working in non-incognito version. Afraid to do anything like logging out or restarting my browser because it may break again, lol. Thanks for your help.

🙂 I am glad the text is updated! Thank you for flagging it as well, if it did say that, we would want it changed!

If you have any further issues, please let us know!

I'm having the same problem, got the same message. I went through all the suggestions on the troubleshooting webpage. I have the most updated Chrome ( Version 79.0.3945.16 ). Any other suggestions? 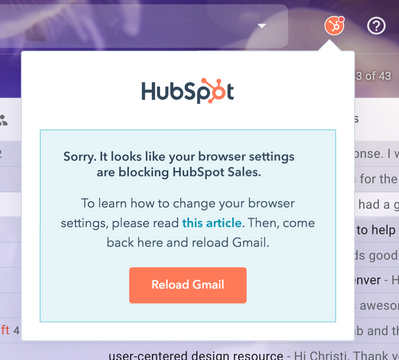 I also have this same issue. My Google Chrome updated yesterday and ever since, it hasn't worked.

How do we fix this issue?

Can you please send along screenshots of your Chrome settings confirming you are not blocking third party cookies? 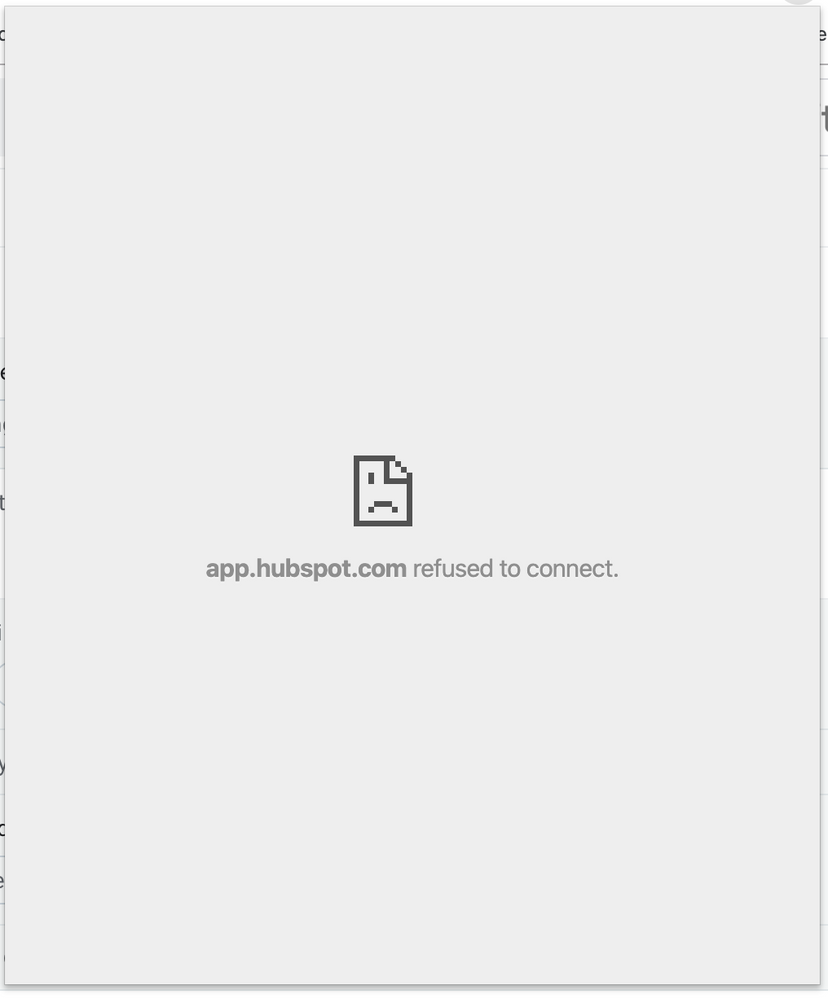 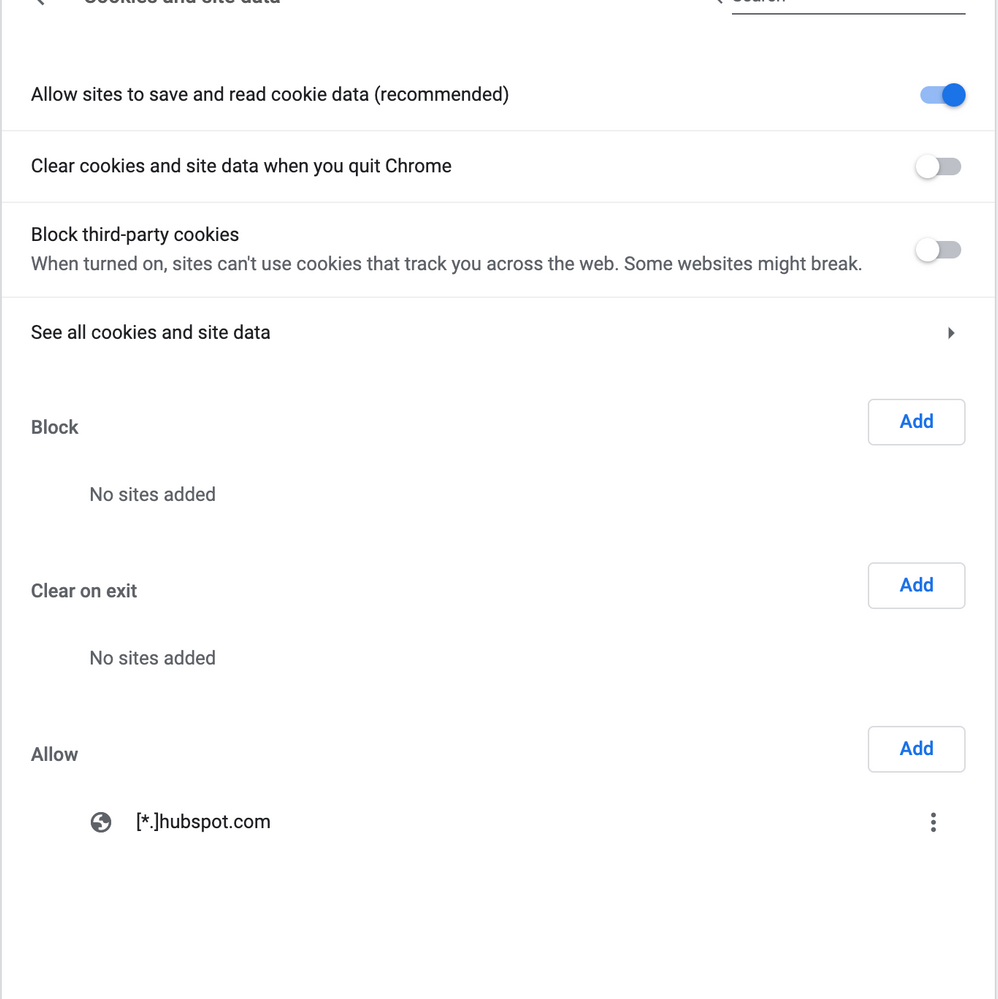 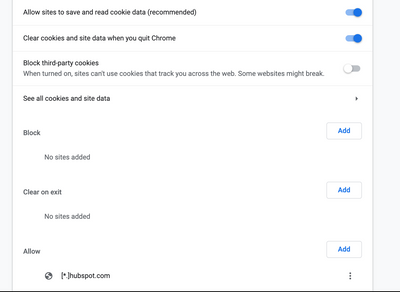 I appreciate you sending the screenshots along!

Do you mind confirming the issue persists when all other extensions are disabled within your browser?

I can honestly say that I really did do every single thing on the troubleshooting webpage that the error message sent me to - multiple times. That's why I'm looking for suggestions that aren't on this list:

My other computer didn't upgrade Chrome to v79 and is using v78 and Hubspot is still working fine on it. The settings for that computer and this one are exactly the same. I don't know how to go back to v78 of Chrome or else I would to see if that fixes it. I'm definitely not going to change my version on my other computer becasue that's the only one able to use tracking at this time.

I have again disabled all my extensions in Chrome, removed Hubspot Extension, reinstalled it and still same issue!

I also have the same problem (with Chrome Browser). The suggested steps in the HubSpot helpcenter did not help.

I also have this same issue

We have some fix?

Thankyou for your support!

Any updates on how to get back to normal functionality?

As a manual workaround, I have created my HS bcc address as a contact  and then created "bcc" as a label and added the bcc address to that label. This helps with quick entry to bcc and to get info into the CRM, but I'd love to be able to get back to business with the HS functionality that is intended.

Thank you for your patience! I have been partnering with the team internally to get best next steps.

Can you all please complete these steps and direct message me the file:

1. Open a new tab and go to chrome://net-export/
2. Select the Include cookies and credentials option
3. Click the Start Logging To Disk button.
4. Reproduce the problem in a different tab (the chrome://net-export/ window needs to stay open or logging will stop.)
5. Click Stop Logging button.
6. Please send me the resulting log file through a direct message.

Having the same issue on Chrome build 79.0.3945.16. Disabled all extensions with no success.  Tried the logging but after pressing "Start Loggin to Disk", not seeing any option to Stop Logging.

Went through steps. Tried to copy paste logs into a DM and my tab instance freezes.

I've tried to send you the log file but It isn't allowing me to as its a bit file.

Anyhow, I right-clicked on the extension and looked up the console - I found these few errors which might be helpful?

This seems to be the main issue...

I dont understand that Hubspot is no able to escalate and communicate to customers this thing when there are hundreds of open tickets for it...

Thank you for your patience! I have heard back from the team, and while they are actively working on updating the app to work with the following setting enabled, these are steps for an immediate solution.

Go to chrome://flags and set the "SameSite by default cookies" experiment to "Disabled".

This has fixed my issue!

This workaround works! Will you remind us to reset to the original settings once the issue has been fixed? TY!

That worked! Thank you

Thank you so much!

Your advise was very helpful/