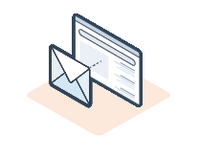 So the iOS 15 changes are out in the wild and I thought it was best to start a fresh thread to give everyone a place to ask questions, help each other, and share their experiences.

Director of Product for Email

can you please let me know how the apple update will affect intel on email forwarding?

Has anyone else started seeing drops in Open Rates, per what @TomMonaghan posted about Hubspot bot filtering?

A little bit about Bot Filtering.

There are security vendors who primarily play in the enterprise space that have been doing this “open every email and click every link” thing for a while now.  In fact, we’ve had an option to filter these so called “Bot Opens” in your portal’s settings since 2017 and it’s been defaulted to on for as long as I’ve known (see: Tracking & Analytics > Advanced Tracking and find the checkbox for “Bot filtering”).

Well as it turns out, our system is good, maybe too good, and it is correctly categorizing Apple iOS 15 opens as if they were from bots (because they are) and filtering them out automatically if you have this feature enabled.  Note: for Apple iOS 15 events, this does not filter clicks, unsubscribes, or spam reports, only opens.  While this prevents all the “false” opens from skewing your results, it also prevents you from having complete results.

Here’s a simple example:  Presently about 10% of the traffic we’re seeing is being opened with Apple iOS 15 devices.  So if you send to 1,000 recipients and have Bot Filtering enabled, you’ll only see opens from about 900 recipients - all of the folks who are not using Apple iOS 15 devices with Mail Privacy Protection enabled.  But we do not actively remove sent events, so in effect, your open rate, in this example will actually appear to go down over time, though we believe the true activity has not changed.

On the performance dashboard, in each specific email campaign, it shows opens by email client report at the bottom.  It would be great if we could click on the bars in the chart to see who the IOS contacts are.  Exporting that so we can create a list would then allow us to send A/B emails and separate that group in future emails.

Huge assumption here, but as that report with the email clients already exists in the email performance dashboard, perhaps its not a mountain to add in the above features as the connections are already there?

It's really a perfect workaround for now. 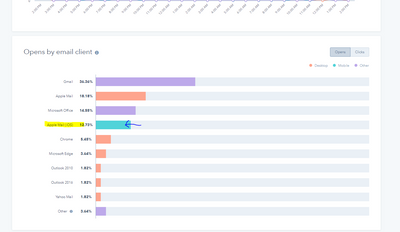 The challenge with a lot of these suggesstions (while at face value, they're great) is that this is reporting on the first open of an email by the recipient.  What I mean by this is say you are sitting on a zoom meeting and your passively scolling through your inbox on your iphone and you open an email about an upcoming webinar that looks intriguing.  At that point, the open fires and is recorded.  BUT, you didn't register for the webinar because doing that on your phone would be a major PIA.  So you don't delete the email and come back to it a few hours later and you open that same email on your desktop / laptop to register for the event and the open fires and is recorded again.  The second open is a better signal, however, since the first open happened on an iphone, in the above report, it's indicated as such.  So if you start treating the individuals differently that happened to open your email on their mobile device first, you could be leaving real engagement on the table.  All in all, people have multiple devices and trying to pinpoint iOS users doesn't do a lot of good.  I just assume everyone is using iphones which allows us to make better decisions to stregthen our email program.

So in the Marketing Email Performance View where it shows "Opens by email client"...in our case as an example 34% Apple Mail....this does NOT include those that are filtered out by the bots setting, correct?

There is an open community request to allow tracking/editing of timezones that is certainly applicable to the challenges presented by this email update>. Please upvote this request to HubSpot and let's make it happen!  https://community.hubspot.com/t5/HubSpot-Ideas/Manually-Changing-Adding-Time-Zones-for-HubSpot-Smart...

Hi Tom - Can you tell me if HubSpot can sync contact information for people who sign up for email marketing twice, using both their regular email address and also an address hidden by Apple's privacy protection. Will those get merged into one contact property?

How are "unengaged" contacts being affected? Since we cannot accurately continue to use open rates as a metric to track engagement, what do we do? Make our own list of unengaged users?

@TCremeens the issue with a report like that is, if a user has an iPhone and Imap or POP3 their regular Gmail to the I phone mail app, that inbox will get treated as an iCloud client.  So you will have skew data anyways.  This is a bigger picture. Im assuming this will also play a role in the Safari browser as well.

Someone may have already asked this, but it would seem logical if Hubspot could automatically filter post-send analytics by device type. i.e. iOS users vs not, and provided segmented analytics that way. For example, Open rate for iOS recipients may be 100% since they preload the pixel with a 3% click rate, but non-iOS devices (including computers) had a 32% open rate with a 3% click rate. That would provide a benchmark for both types of users: Trackable and untrackable.

Or give us the ability to create lists based on known device type. So we can segment our lists for iOS users vs non to better track our campaigns.

@AMasters6  I don't think hs will be able to do anything with this. There was a tool called Netsuite Bronto that had a more granular breakdown on reporting and customer triggers with dynamic code.  Makes sense why they shut down, they saw this coming and probably no way to fix it. the best way that I see this for more efficient reports is to todo a web browser tracker code. Then make a report for activity on the website. When you segment the people that got activity on-site and sent a specific email, then you would be able to get a better idea of the open rate for your campaign.  It's one more extra step but this way you can correlate directly with behavior and acquisition.

So, if someone opens an email with the masked IP, does that affect marketers being able to track activity on your website as the email cookie is the conduit to tracking them?

These reports are great, but we still need to be able to use this information in workflow triggers and list filters. As of now, the browser information is non-existent on the contact records.

Tahnk you so much @MerchantCentric , this is exactly what we were looking for!

In the Email > Performance analytics, I see that HubSpot tracks everyone's email client:

"A recipient’s email client will be included in the data below when an email is opened or a tracked link is clicked."

How about a way to attach contacts' email clients to their records, so we can separate the Apple Mail people out, just as a way to keep them out of certain reporting. I know people use more than one email client (Outlook at work, Apple Mail or Gmail app at home).... but it's just a thought.

Support has solved this for me today!

Build a pivot report with Browser Family and Browser Name (Rows), Browser Type (Columns), and Count of Opened Emails (Values). For a filter, choose whatever Event Timestamp value you like.