Sounds like this needs to get pushed up @TiphaineCuisset

Quite frankly I'm very frustrated with this unsatisfactory report. And it angers me to see so many people have the same issue and nothing has been done.

If you use the report mentioned by @Lisette1 in this thread, does that answer your issue? (Going to Reports > Analytics > Sales Analytics > Sales Outcomes > Deals won & lost - you can then filter by teams, pipeline, rep, etc. )

If you want something more specific, I'd recommend upvoting that mentioned Idea and commenting with as many details as possible. You can also subscribe to the idea (Options > Subscribe) to get notified if the status changes.

I also find this highly troublesome and doesn't feel in line with the overall advanced report builder.

@matedavid we are also a SaaS and have a similar requirement.
I have suggested a simple standard report idea. Please up-vote or comment here: https://community.hubspot.com/t5/HubSpot-Ideas/Pipeline-performance-report-conversion-rate/idi-p/469...

We are an SaaS company offering 15 days free trial for buyers which can result in a significant difference between the dates of creating a deal and closing it as won. For example our first interaction with a new registration occured in January 2021 (deal create date), the buyer started the trial period but decided to only complete the software subscription in May 2021 (deal close date).

For us calculating the conversion rate we need to divide the count of close won deals (based on the close date) by the count of deals created (based on creation date) for the matching period of time (for us this is on a quarterly basis). Does Hubspot offer a report that allows to use custom formulas this way?

Appreciate the help from the community. Best - David

It would indeed be required if we could see the conversion rates (%), even when the contact didn't move through all the lifecycle stages

Thank you for reaching out.

This is not possible at this stage within HubSpot without the funnel report, I'd recommend upvoting this Idea in our Ideas Forum regarding this. The status is currently In Planning by our product team. You can also subscribe to the idea (Options > Subscribe) to get notified if the status changes/for any update.

I don't really understand why this has been marked as an accepted solution. I'm having exactly the same struggles. The funnel report doesn't give conversion rates at each deal stage. I also want to be able to see an overall conversion rate across all pipelines of closed won but just can't find a way to do it. Having to export to excel each time I want to calculate this just makes me think why are we paying so much money for a CRM.

Experiencing the same blockers here. Due to the nature of the services we sell, some take more negotiating and thus necessary to move through different stages, and other services are quick wins that often jump a lot of stages and go straight to closed-won.

We need a way of reporting our win/lost % rate to inform our targets, resources, campaigns and more. This would hugely increase our productivity within our commercial teams. 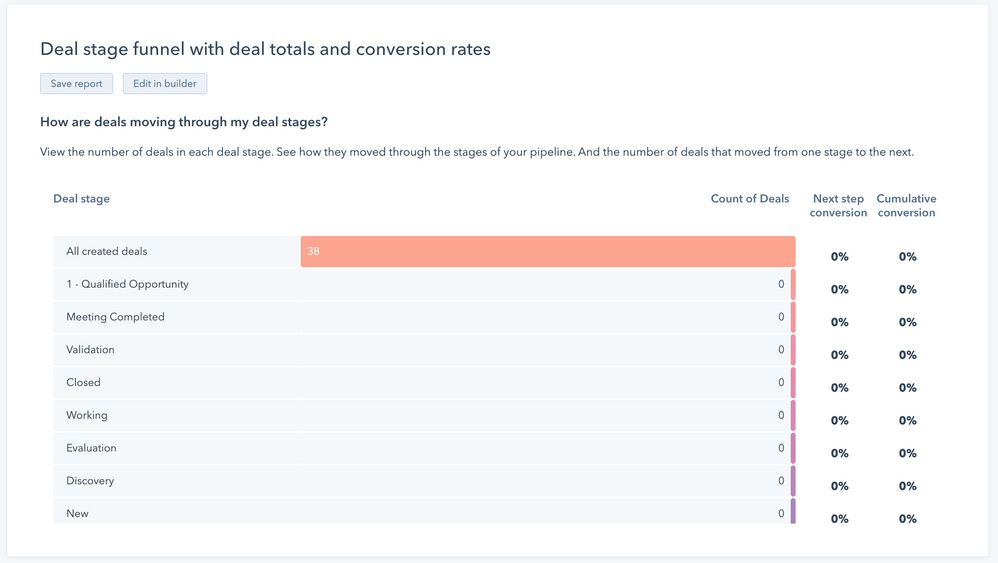