I'm looking to create a report that shows the closing rate percentage for each sales rep. Normally it would just be a simple (deals closed/total leads) calculation, but I can't seem to find that on HubSpot. Is there a way to do this?

One way to show your close rate is by average forecast probabilities of closed deals. Because those of closed deals will simply be either 0% or 100%-- If you had 2 closed-won deals and 2 closed lost: 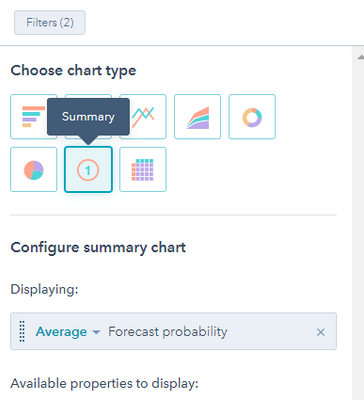 This is great! Thanks for sharing, @MrBean!

why has this never been created? It's the most basic of sales reports. I just chatted with support and learned it still doesn't exist.

Thank you for feedback.

I would highly recommend you to please post this product suggestion at our ideas forum.

Is there a reason why this current thread with the same concern/question won't work? It has lots of comments with people wanting the same.

Thanks for the pie chart work-around @Lanny  and @rboniek!
@Lanny question for you...when using the Funnel Report, when I filter the data range, for example by last year, I realized that this excludes Deals that were created prior to last year, even though they may have closed-won during last year. If I were creating the same report for each year, they'd be left out of the year before as well, since they didn't Close in that year. How do you handle reporting on those?

Only seing this now @amandafann .

Sounds like some sort of filter issue. You have to select close date not create date in the filters. Hope that helps. Otherwise, please drop me an email l.heiz@bee.digital

two (not so ideal) ways of doing this.

Ideal? no not in the least. Especially this is such a basic sales metric and the raw data is clearly there. I still do not understand why in the most recent reporting rollout there wasn't a "custom metric" (not custom properties) option. Every basic analytics tool has that.

I'm actually doing most of my monthly reporting that I use for management updates & decision meetings in databox. For everyday use, quick checks and for my reps it's mostly sufficient. Still frustrating knowing the power of SFDC however.

I'm on the same issue here. There should be an option to display the % of close rate .

I am trying to create this same report. Any Updates?

also looking for a built-in report

Can you send along what reports you have created so far? Additionally, are you working with the available reports, or do you have access to the reporting add on?

This isn't a full list. This is a page on managing dashboards. I don't quite understand why a simple close rate report is nowhere in Hubspot. It's a critical metric to understand and forecast revenue based on past activity.

Thank you! This isn't exactly what I wanted, but it really helped. @ Hubspot work on getting this as a default deal report, please.

I don't find this elegant. I've spent 30 minutes trying to recreate what you've described, with no luck. I'm also then unable to build on that to try to understand close rates for certain products or line items. Elegant would be clicking on a report showing Close Rate by Rep or Hubspot Owner, which seems like a very basic default report for any CRM.

You can do that with third-party apps from the App Marketplace (cough cough, Demand Sage, cough cough).

Other than that, I think the easiest way to do it is probably to make a bunch of clones of the "Deal stage funnel with deal totals and conversion rates" report and filter each only for deals owned by a particular rep.