How to Best Report on Number of Demos Booked

I am in need of some creative ideas! We are a SaaS company struggling to accurately report on the success of our sales opportunities: primarily prospects who book a demo and prospects who sign up for a free trial.

I want to answer these questions:

At first, many of these questions seem easy to answer. But as we dig into the tools available and the data more, things become more complex.

For example, answering the simple question of "how many demos did we have each quarter?" and "what is the conversion rate to closed-won?" is tricker than one might think. At first, I was utilizing HubSpot's deal conversion reports. I could see, at any given timeframe, how many deals entered the demo stage. And I could also see how many of those converted to closed-won in the same timeframe. However, because some prospects sign up for a free trial first (which is a later stage than demos in our pipeline), those deals never enter the "demo" stage at all (we do not move deals backwards in the pipeline) even if they do, in fact, book a demo with a salesperson.

So, deal stages don't allow me to perfectly report on how many demos were conducted by our sales staff. At least with that way our pipeline is currently structured...

I considered tracking the number of Meetings booked in the Sales Productivity reports. But meetings includes all kinds of meetings and not just demos. So that won't work.

I even has a Contact List of all contacts that have requested or booked a demo through the various form submissions (there are several ways someone can book a demo, see more details below). I can filter this by timeframe, so that is helpful albeit a manual counting process each time we want to track a new timeframe. However, this doesn't account for those that actually followed through with the demo. It only tracks those who at some point requested it.

For reference, here's how demos are currently booked:

So, I guess my questions are:

I am open to restructuring the way we currently track this but every new way I have thought about comes with other issues that I don't know how to solve.

Hope to hear from some of you!

For conversion rates, I've created a similar solution for other elements of our business such as the close rate for deals that we have a Proof of Value (POV) on vs. deals that we do not. We track POVs with a few properties - checkbox for POVs, their phase, and so on.

The easiest solution I'd recommend is using a custom property to track demos (and the number of demos i.e. 1, 2, 3) and any other properties you've mentioned. This should be pretty straight forward so long as you don't have more than a handful of demos per deal. Then you can create a custom report based on the metrics you've mentioned.

Since you use swimlanes for the activity, you can create workflows that update the properties as a deal moves between stages.

Hope this helps a bit!

Thanks so much for your response!

So, you would create a custom numerical field for "# of demos" on contact and company records. Then add a workflow anytime someone "books a demo" (trigger) and "increase or decrease property" value by 1 (action). I assume that if a demo is manually booked by sales, then they would update that new custom field manually.

Am I understanding that correctly?

A few questions I have about that:

I realized that something I wrote may have been unclear. I don't want to necessarily track how many demos per each contact and company.

This is where deal stages and funnel reports come in handy. However, I'm having some issues accurately reporting on the number of demos using deal stages. Because some people have a "demo" with sales but never go through the "demo deal stage" because they are already in a later deal stage in the pipeline such as "free trial."

Ah totally makes sense! So the initial answer I had could work for some of what you need, but not all of it.

I've created a similar scenario to track BD activity and how well they do over any given month/quarter/year. I used a date picker and then automated the date based on actions an AE would take with the deal. I imagine you could do something similar except change the stages to "Demo 1" etc.

Here is a screenshot of the properties and the report created: 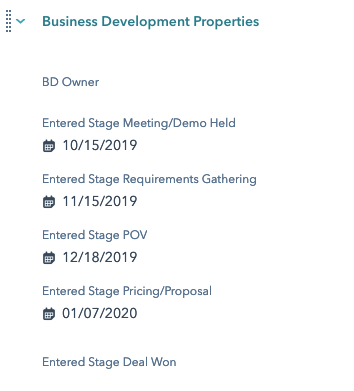 How to Best Report on Number of Demos Booked
Sales
Feb 5, 2020