Hello, when we are re-assigning deal owners, how can we automate it so that the contact owner associated is automatically updated to match?

Help the Community by marking it as SOLVED

Q: How can we automate it so that the contact owner associated is automatically updated to match [the new Deal owner]?

Short A: You can, but the solution is very HubSpot User-specific. This means we'll need a separate solution for each new Deal Owner (if there's more than one). No way around it currently.

Scenario
We have LOTS of HubSpot Deals (>~20) that belong to a dude (devuser@mfjlabs) who is either changing jobs or leaving the company. As such, we need to assign his/her deals to another HubSpot Deal Owner (frank@mfjlabs).
[Important note: we're assigning ALL deals to the same new owner in this scenario.]

We used the >~20 criteria because automating this work may not be worth the risks involved when reassigning fewer than 20 deals (in our humble opinion).

Solution
-1- Build a Smart List (of contacts) whose Deals ever belonged to devuser@mfjlabs.

-2- CHANGE OWNERSHIP FOR ALL DEALS that belong(ed) to devuser@mfjlabs
This step may be modified slightly if you don't care about historical data in deals that are already closed. In that case, just target open deals. 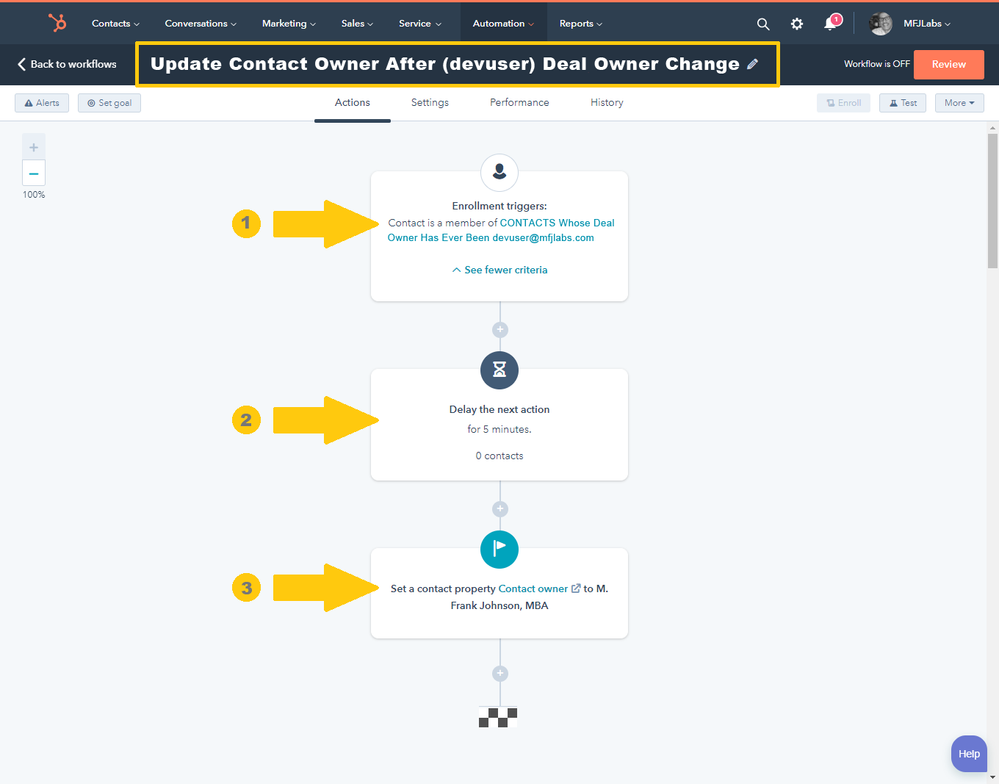 This Risk(s)
Depending on how we've handled Deal Ownership in the past, we risk making sweeping changes that can take quite a bit of work to undo if we don't get it right the first time. Speaking of which, there is no 'undo' command to fix these types of multi-step automations.
[ok. i feel much better now. haha]

Reminders
We need to remember a few things about HubSpot when dealing with Deals.
-1- HubSpot doesn't currently allow direct access to Deal Properties in Workflows.
This means we can't simply 'Copy Deal Owner to Contact Owner', but we can dream.
-2- Deal Owners aren't directly related to Contact Owners for those deals in the DB (meaning Deals can have different owners than the contacts associated with those Deals -- i.e., the problem we're here to solve)
-3- HubSpot is a contact-centric CRM, so Smart Lists (no matter what the criteria) ALWAYS yields Contacts.
This isn't typically a problem unless of course you're looking for a list of ... wait for it ...

Hope that helps solve this for you.

Please include @MFrankJohnson in your message if you'd like me to reply.

Thanks @MFJLabs for your answer - the detail was helpful! Yes, I see how to do this in one fell swoop with the workflow and smart lists that you mentioned, however I'm looking for a case-by-case basis, whereby the contact owner change is only triggered when the deal owner change in on an ongoing basis, rather than at a specific point in time. I see how your solution could help for the latter (change all at one time), however I need a solution that would prevent discrepancies between contact owner and deal owner as time moves forward and sales people reassign deals, but don't do the same for contacts. And this would require a heckuva lot of permutations to handle all possible scenarios. I'm willing to setup workflows to reassign on an ongoing basis for each sales person, but I'm beginning to think this is not possible.

And YES - mapping deal properties via the workflows is sorely needed.

Thanks for the tips, and if you have anything to add it's appreciated. Cheers.
Peter

Well we're sorta like the Jack Nicholson movie at this point ... "As Good As It Gets"