How form is appearing when embedded in pop-up windowI'm working on a client site who is using SiteFinity and has lots of forms. When I embed the code on the page itself the HubSpot Defualt styling is stripped, but once I add the embed code to appear in the pop-up window the HubSpot Default styling is still slightly showing through. Why does the default style strip once embeded on the page itself, but not in the pop-up menu? Do I need addition code in the javascript? The CSS styling itself works fine in the last image provided from a page, but not in the pop-up.

CSS styling has been removed. I've tried with and without the space in CSS:' '; 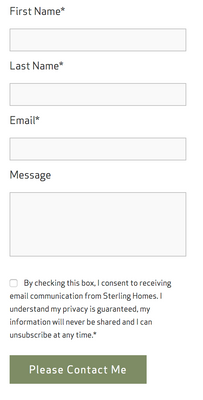 How form should be appearing

@DaniellePetersis correct. Each team member has their own form embed code. Each embed code would need the css: '' parameter.

Can you post a link to the page? it will be easier to troubleshoot if I can look at the CSS on a live page.

http://sterlinghomeswpg.com/meet-the-team < This is the page with the issue. Blair Jaquet contact was the one I was troubleshooting with.

http://sterlinghomeswpg.com/home-details/24WheelwrightWay < This is them showing up properly

Looks like there are ~15 form embed codes on that page and only one has the parameter. You need to add that to each embed code, as each embed contains the defauit styling which is general enough to style all of the HubSpot forms on the page.
Reply
0 Upvotes

@DaniellePetersis correct. Each team member has their own form embed code. Each embed code would need the css: '' parameter.

To make sure I'm understanding this correctly, I would need to add the css: ' ' part to each embedded form in order for the styling to show properly on the page?