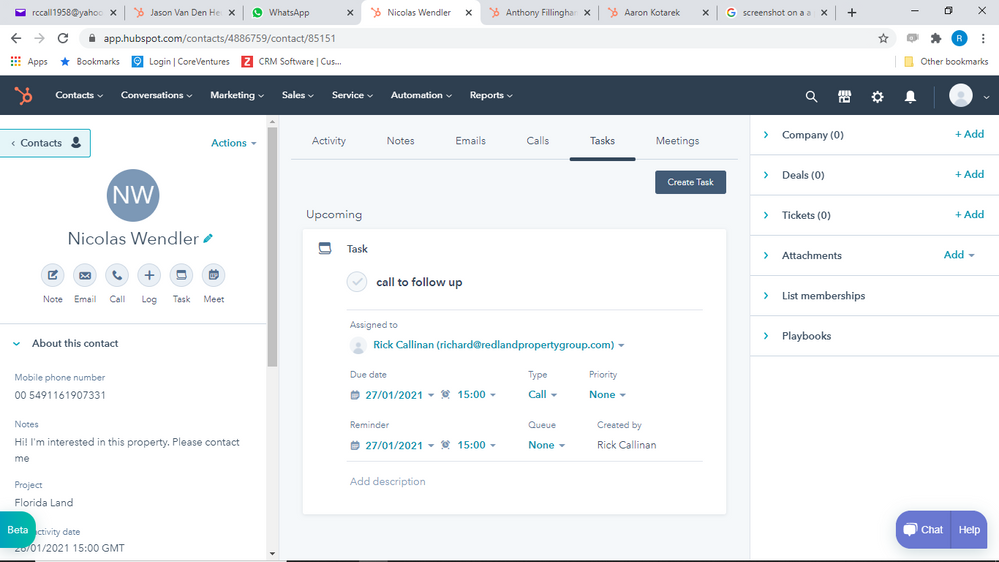 The right hand panel on the above has appeared just recently. I know it wasnt there before because it has compressed the rest of the info on the page. How do I get rid of it?  Grateful for any help - its just a bit irritating. Cheers

The right hand panel on the record screen has been a feature for some time now. If you scroll all the way up, however, you there should be a double chevron button (>>) to collapse the panel down.

Hey @Rccall, thank you for posting this! I'm a product manager on the HubSpot CRM team and I can provide some detail here.

As @Phil_Vallender mentioned, for *most* customers there is a collapsable arrow to close this panel. However, we've recently made the decision to remove the ability to collapse this panel for 4 reasons:

1) It slowed down each page load, by removing this collapse panel we've decreased the load time for each record page by an average of 10%.

2) We found that less than 2% of customers were collapsing this panel regularly and it took up a lot of space for those who wanted to leave it open. By making the default state "open" we were able to show more data on the page to the 98% of users who never collapsed the panel.

3) Soon, we will be releasing functionality that makes the timeline that you see in the center of the record more dense and show more data on a single screen. If you rewind to the day we built this collapsable panel it the first place, it was because the timeline did not have this denser view. Since that is coming soon, the collapsed panel will lose a lot of its utility.
4) This panel has valuable information in it that can be missed if not opened. Sometimes, particularly newer customers, would have this panel hidden and never realize it could be expanded to show additional data to help you gain full context into a record. By defaulting this to an "open" state, we can ensure that customers don't miss any data that they need to gain context into a given record.

In sum, all of this helps the CRM record load faster and display more data in a single screen. Currently, this new experience has only been released to a handful of customers who were not frequently using it. Over the next few weeks, we'll be rolling this out to all customers alongside the density changes I mentioned to the timeline.

Hopefully this helps clarify the state of the record page you're seeing, please feel free to respond on this thread if you have any additional feedback or questions I can help with!