Search APIs & Integrations for solutions or ask a question
Turn on suggestions
Auto-suggest helps you quickly narrow down your search results by suggesting possible matches as you type.
Showing results for
Search instead for
Did you mean:
Options

Has anyone had any trouble getting the following error:

I am using the following page: https://developers.hubspot.com/docs/api/crm/contacts

I test the inputs within the documentation and get the response I needed with the code below (Access token hidden for obvious reasons 😀) but when copying and running in Pycharm the get by ID method does not seem to accept the properties with the history parameter. 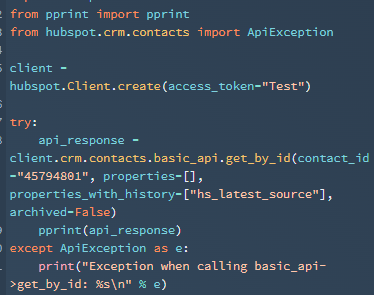 I instead get this error saying it does not expect it:

Any guidance would be great!

I hit similar problem, expect in the opposite direction (i.e. worked fine in Jupyter Notebook but fell over when I used in custom code block with a HubSpot workflow).

I think it's maybe something to do with the the way I'm creating the HubSpot client object, but I'm again finding the HS API documentation rather frustrating.

I solved this by falling back to using GET request with API key authorisation, then adding the parameter propertiesWithHistory=desired_property as suggested in this old post. Essentially:

Which will return json object rather than the weird hubspot public object thingy. I'm not sure how this would work if you were hoping for multiple properties with history.

I also had the idea of batch reading, because it too has a propertyWithHistory argument in the method, but it appears you can only search by contact email and not by Record ID.

Hopefully someone else has a better idea than this though!

Hi, @dwhittington 👋 Hey, @JBeatty @taran42, do you have any experience here? Thank you! — Jaycee