Hello, I added the mailerlite data sync app as integration for the two-way sync between Mailerlite and Hubspot.

I chose to sync all Hubspot contacts to a specific, already created group in mailerlite (see first image) with all the standard field relations (see second image). Unfortunately after a few hours, still nothing has been synchronized (we have 100 contacts). Does anyone maybe know if I forgot to do something or why this might not be working? 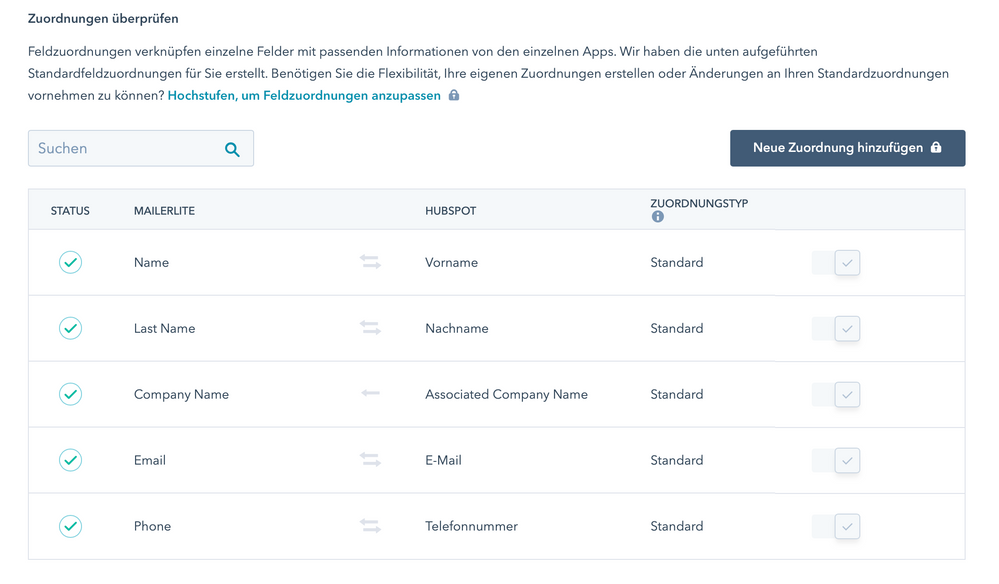 Are you still having issues with this?  @Josh , ever work with this integration?

Yes, there is still nothing synced yet unfortunately!

Wanted to chime in here - this is a fairly recent data sync option, so the documentation available on our end might not cover all use cases yet - but we'll do our best to get to the bottom of this! Because no contacts have been synced yet, I'm wondering if this could be an authentication problem on MailerLite's side. Is the email address of the connected user in MailerLite associated with your HubSpot account? If not, it would be great if you could add that email as a user in your HubSpot account (with Super Admin permissions), remove the integration (Settings > Integrations > Connected Apps > More > Uninstall), delete cache and cookies and then initiate the data sync again with the new user.

I hope this will help!

Hello @MiaSrebrnjak - thanks for your answer.

In the meantime I asked the Mailerlite support to change the API key, so I can re-try. This seemed to help a little, as it did syncronize a few contacts, but it ignored my setting for the groups (see first attachment) and it did not sync all contacts. Do you have any more suggestions for me? Or do you have access to some sort of log, where we could figure out more?

there isn't a sync log you can check on your end at this time, but I can have a look at the information available on our end!

Could you send me the following information in a direct message?

Thank you @MiaSrebrnjak - I just send you a private message!

I'm having the exact same problem! Was a solution ever found @ariz  @MiaSrebrnjak?

I'm still looking into this, apologies for the delay @ariz!

An update if you're still experiencing the sync issue: @ariz was able to sync several contacts over to Mailerlite after Mailerlite support performed a couple of API changes on their end.

Additionally, please check if all of your HubSpot contacts have the "Name" and "Last Name" properties filled out. We've noticed several cases where the sync would fail if the contact's last name or name were missing. Mailerlite made those fields required because they're used for email personalization.

I hope this helps!

Sorry if this is confusing the matter, but I have another thread over here that outlines what's happening.

So, if I'm reading your response correctly, the Mailerlite Data Sync cannot perform two-way syncs from groups in MailerLite to Lists in HubSpot, despite the interface allowing me to choose these options?

a week ago - last edited a week ago

I apologize for the late reply! Thank you for the link to the question you posted in our Ops Hub, I've seen you were able to get confirmation about the syncing rules from our data sync experts.

I'll go ahead and move this thread to the Ops Hub!